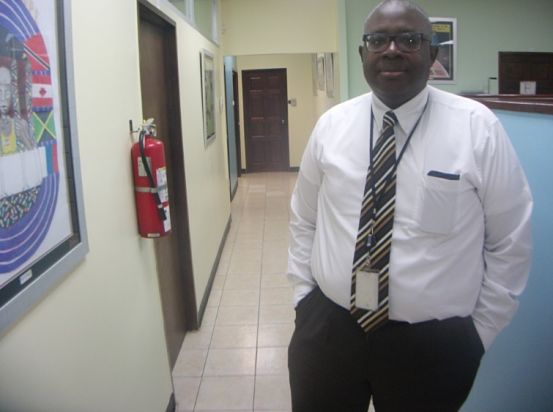 ON THE JOB: Brown, photographed at the JADCO offices in Kingston. (Below) at a JIS think tank session.

Growing up in Water Lane, a tiny district in the heart of Vere, Clarendon, Carey Brown found himself drawn to one particular boyhood fixation: cars and car-related gadgets. So he wasn’t surprised that by the time puberty hit and his parents enrolled him at Glenmuir High, he was nursing a full-blown love affair with mechanics and the sciences. “Especially Chemistry. It’s still my first love,” he reflects.

Determined to make a serious career out of what was quickly becoming an unshakeable passion, he successfully applied to UWI, majoring in Chemistry (with a minor in Mathematics) and went on to land a plum job at bottling company D&G, the first in a long line of big jobs. After subsequently arming himself with a Diploma in Management Studies, which he followed up with an MBA from the Manchester Business School, Brown lent his skills and expertise to such government entities as the Ministry of Finance & Planning, the Youth and Culture ministry, and the Jamaica Cultural Development Commission (JCDC), which he served as Director of Planning, Research and Information from 2006-2009.

But, by all accounts, these public-service posts were detour stops on the path to his higher calling: stepping in to lead the Jamaica Anti-Doping Commission (JADCO) in the wake of the Ann Shirley fiasco that spawned international headlines. “A couple of my friends said I was a brave man, but I had no reservations about coming on board,” recalls the executive director, who joined the team in November 2013. “One of the things that appealed to me about taking on such a challenging job was the opportunity to deal with different issues at various levels. It’s not just about testing athletes; there’s the matter of communication, education and spreading awareness that’s just as important to me.”

On any given day, Brown’s job sees him fielding questions from athletes across a range of disciplines, responding to different organizations who have submitted requests and, more often than not, joining his team members out in the field conducting actual tests. “I wouldn’t say there have been any surprises,” Brown insists, seated in the boardroom at JADCO’s South Odeon Avenue offices. “Coming in to a job like this you know there will be challenges, so you make up your mind to face them as they come.”

Case in point: when new testing methodologies are introduced. “We recently started blood-testing, and some [athletes] don’t like needles. So part of the challenge is to get them to stay as calm as possible,” Brown explains. We try to keep the [station] as comfortable as possible. Good rapport between athletes and officers gets the job done.”

Carey Brown knows all about the benefits of ‘calm’ and team work. It’s one of the fail-proof combos he employs when bonding with his son, a fun-loving seven-year-old who is on “the autism spectrum.” Quality time with his kid, especially on a weekend, not only includes therapy sessions but hours devoted to activities like computer games. “He’s very important to me and one of the reasons why I work as hard as I do,” shares Brown, who’s been married since 1991. “My whole family is very important to me.” 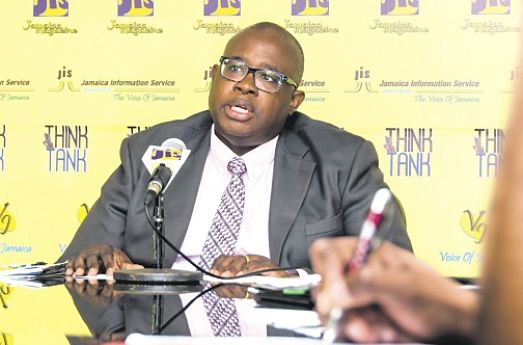 Set to turn 50 next September, the medium-built and bespectacled Brown is an engaging conversationalist who moves easily between topics ranging from servicing cars with his dad as a boy to his halcyon days at Glenmuir to being his wife’s all-purpose handyman around their Sr. Andrew home. “I give thanks for life,” reflects the self-professes homebody, who sang in the school choir, served in the quiz club and put his strength to effective use as an amateur shot-putter and discus thrower back in the day.

That’s why in working with an organization like JADCO, and at a time when the international spotlight is on out top athletes more than ever, Brown’s service is coming is coming from a place of genuine understanding. “An athlete’s life is not easy because they have to subject themselves to a lot of things,” he points out, emphasizing the no-notice rule that governs drug testing, especially for those who fall in the “registered testing pool.” “They have to keep the rules and standards in focus or they will get side-tracked.”

And when it comes to the WADA-issued list of banned substances, Brown doesn’t mince his words. “If athletes don’t have the requisite knowledge they can make mistakes,” he says. “The simplest effort can be career-threatening, so it’s imperative that they take the necessary precautions when going to their doctor for a prescription, for example.”

The job of looking out for young athletes (many of whom compete for Jamaica in athletics, cricket, swimming, netball, football etc.) and keeping them ‘clean’ is all in a day’s job for Carey Brown. “It has been a fulfilling experience so far. You get a chance to serve your nation. We have top-class athletes, and you get to be a part of their journey,” Brown says. ‘We help to level the playing field and make sports fair for clean athletes. We are here to help and to serve. It’s really a matter of service.”

“We are a small team [at JADCO], and that gives us an opportunity to constantly evaluate and re-evaluate and make our services more robust.”