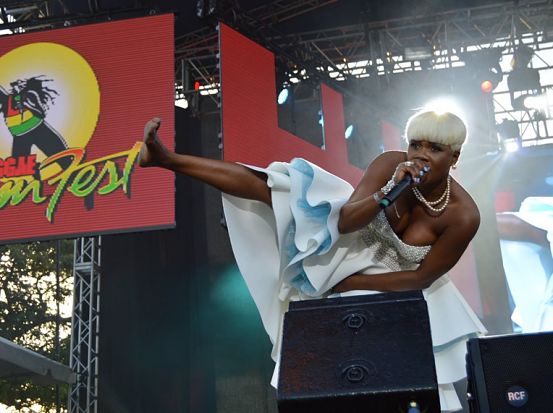 Reggae Sumfest 2015 delivered everything a great live music event should: phenomenal acts, captivating performances, and a production value that fused state-of-the-art technology with audio-visual wizardry. In short, what played out at Catherine Hall on the weekend was both spectacle and solid entertainment. Here, TALLAWAH puts the spotlight on ten performers (a mixed bag in no particular order) who proved unforgettable.

1. LADY SAW
As the long-reigning queen of the Jamaican dancehall, Marion Hall can lay claim to some serious firsts. Add to the list: the first female act to close Dancehall Night, rising to the occasion in her own inimitable style (translation: raunchy-riotous-perversely funny) to surpass even our wildest expectations. Highlight: Now we have a whole new definition for the phrase “likkle bit”

2. LUST
We always knew these talented brothers could carry a tune, but nothing prepared us for the hair-raising harmonies and captivating stage presence they brought to Catherine Hall on Saturday night, as they breezed through their popular hits with equal parts ferocity and finesse. Highlight: A masterful rendition of “Just as I Am”

3. JENNIFER HUDSON
Whether you were hooked by her sassy repartee, dazzled by her supersexy ensemble, or simply left mesmerized by her out-of-this-world vocals, J-Hud left no doubt as to why she’s heiress apparent to Whitney Houston’s throne, holding us in her thrall for well over an hour. Highlight: Her encore-generating rendition of the Dreamgirls power anthem “And I Am Telling You”

4. JESSE ROYAL
There is something to be said for the smooth and conscious stylings of this roots-reggae soldier who lets his voice do the work. And what an instrument! Without a doubt, Jesse’s whole vibe speaks to what a reggae festival is all about. Highlight: The tender-tough appeal of his mid-performance tune “Ghetto Girl”

5. BEENIE MAN
Who better to bring the curtains down on Sumfest 2015 than the man who lives for big moments like these? Moses proved an unstoppable lyrical force in the wee hours of Sunday morning, delivering a near-seamless blend of hits old and (fairly) new to produce a performance fit for the record books. Highlight: The whole show

6. KAREEN
This year, TALLAWAH’s prize for most outstanding up-and-comer to grace the mainstage falls to this Ocho Rios native, who captivated the early crowd Friday night with rock-star edge, shimmering pop gloss, and a tight mix of originals and covers. Highlight: A take-no-prisoners riff on Rihanna’s “Better Have My Money”

7. PEPSI REFRESH HOUR
A supercool addition to this year’s International Night package, Pepsi ambassadors Kalado, Chi Ching Ching, Zagga, Ikaya, Raine Seville and Denyque needed no more than sixty minutes in all (each performing brisk individual sets) to bring the house down with their vibrant energy and crowd-pleasing balance of song and dance. Highlight: Denyque's sizzling "Ring the Alarm" bit

8. T.I.
If there’s one thing this pint-sized rap star doesn’t fall short of it’s the hefty swagger to complement his fiery and hard-hitting rhymes. There was plenty to go around as the Atlanta all-star worked the Catherine Hall stage on International Night 1 to bombastic effect, scoring a triumphant Jamaican debut. Highlight: A cameo appearance by Beenie Man that only served to up the ante

9. RAGING FYAH
This increasingly popular reggae band brought a very Wailers-esque vibe to the mainstage, producing a performance as memorably rootsy as it was frequently riveting. Just one quibble: We feel the set was way too short for an act of their caliber. But that took nothing away from the overall potency of the performance. Highlight: “Judgement Day” given a righteous-meets-classic spin

10. COMMON
The Chi-Town-bred MC stayed true to the conscious-cool formula that has worked for him for decades, lacing the jam-packed crowd with powerful anthems of uplift, ranging from “The People” to “Testify” to the Oscar-winning gem “Glory.” Highlight: Performing “Come Close” as a serenade to beaming audience member Tiffani