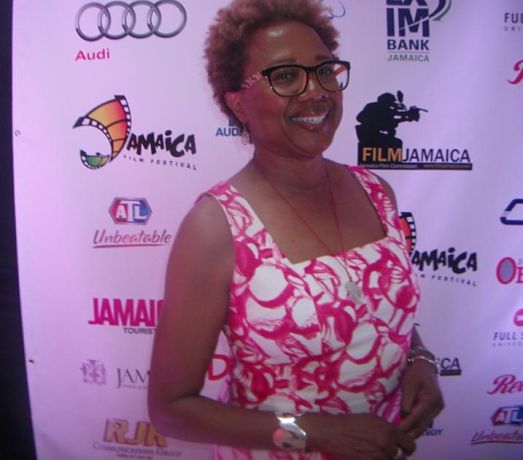 GETTING TO HAPPY: Madison strikes a pose for the camera inside the Courtleigh Auditorium.

“What my family has done is provide a blueprint for other families who want to trace their history and find their relatives,” shares Paula Williams Madison, reflecting on the impact of her new documentary Finding Samuel Lowe, which is about her lengthy search for her maternal grandfather and how she ended up connecting some of the dots in her Black Chinese heritage. Inspired by Madison’s memoir of the same title, published this year by HarperCollins’ Amistad imprint (and directed by noted filmmaker Jeanette Kong), Samuel Lowe not only opened the just-concluded Jamaica Film Festival but ranked among the unforgettable highlights of the week-long event. TALLAWAH spoke with Madison, a former NBC Universal Executive Vice President with Jamaican ties, who is currently based in Los Angeles, about life, relationships, and Mama Africa.

TALLAWAH: It was such a pleasant surprise to discover that your family was instrumental in the founding of the Africa Channel and widening its global reach. How do you feel now about the role the channel has been playing in bringing new news from the Motherland?
Madison: I’m very pleased with what it’s achieved. At the moment, it has a strong subscriber base of about seven million people. We believe in making positive stories about Africa reach the rest of the world. We’ve grown accustomed to seeing and hearing about Africa’s suffering, the drought, the famine. But there’s so much more about life in Africa. Investors are going there in their numbers, so it’s not all bad. There’s more to focus on than the strife-torn aspects of the continent, and the Africa Channel is playing a key role in telling those stories.

TALLAWAH: Has anyone ever told you that you bear a rather striking resemblance to bestselling author Terri McMillan? Have you ever met her?
Madison: (Laughs). I’ve never heard that. I actually met her here in Jamaica. I’ve read her book Waiting to Exhale, and I’ve seen the movie. She is a gifted woman, a really creative person. Someone you have to respect.

TALLAWAH: Let’s talk about the making of Finding Samuel Lowe, which you’ve described as a passion project. What was the experience like over the course of those five months?
Madison: It definitely involved a lot of research and tracing information through the United States, Jamaica, the UK and Canada and China. It was a very emotional journey as you can tell from the film. But for me, the most rewarding thing about completing this project was being able to achieve what I set out to achieve – to find my family and to answer certain questions for my mother. It’s the closing of a gap that was in my family for far too long.

TALLAWAH: Speaking of your mother, you made an interesting point on the panel earlier about her idea of wealth creation and financial independence.
Madison: Our parents raised us to not just have a job but to acquire the capital to create our own, acquire the assets. So I wasn’t the one buying the new car or shopping for the latest fashions. I saved wisely to achieve the kind of financial independence that I wanted.

TALLAWAH: When it comes to giving back to Jamaica what kind of contribution do you want to make in the future?
Madison: My goal is to help show Jamaica and Jamaicans what can be achieved through collaborative thinking. Money is not always the answer. As a nation there are issues that we will have to answer to, and by bringing together our most talented people we will be able to deal with them. And I’m willing to give of my time where this is concerned.