WOMAN OF SUBSTANCE: For Jill McIntosh, netball development in Jamaica is work in progress 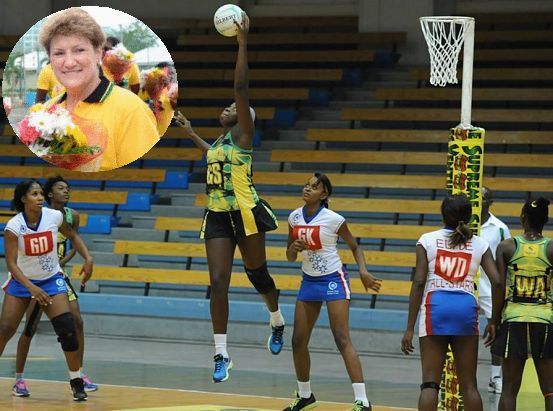 HOLDING COURT: It's a pleasure working with such talented girls, says McIntosh (inset).

A strategist and deep thinker who has fashioned a reputation as a woman who specializes in results, Jill McIntosh knows all about using a little to produce something truly spectacular. It’s one of the reasons the Australian pro has fit in so well with Netball Jamaica as Technical Director of the senior squad, the Sunshine Girls – a team she describes as a set of hardworking young women who can go the distance, thanks to their dedication, willingness to embrace new ideas and make do with limited resources.

It helps that McIntosh, a veteran of the Aussie school of high performance, is such a consummate professional that her expert conditioning of the girls and guidance of coaches Minette Reynolds and Annette Daley has had splendidly nurturing effects on the national programme. The vast improvement in the team’s on-court style, including their agility and overall effectiveness, speaks volumes. “I enjoyed working with [the team] the first time I was here for the Commonwealth Games. So when [President Marva Bernard] asked me to come back for a second time, I didn’t hesitate to say yes,” Jill remembers. “This is a very talented group of girls who have terrific skills, and it’s great to work with talent like this.”

Born and raised in Perth, situated on the western coast of Australia, Jill McIntosh’s bio reads like that of a Hall of Fame honoree of the sport of netball, commencing with her days as a schoolgirl star of the game, all the way up to her retirement from the court in 1986 to take up coaching. She famously coached the Australian senior team to global dominance from 1995 to 2013, the year that Jamaica hosted the World Championships inside a brand-new National Indoor Sports Centre.

So, if there’s anyone who can show our local girls how to beat the best in the world, Jill McIntosh is the woman for the job. Does she feel that our new-look Sunshine Girls has what it takes to finally ascend to #1? “It’s a tough call. The top four teams in the world work extremely hard when it comes to the big championships, and it’s who makes the least mistakes on the day that will win the gold,” she posits. “It’s a psychological battle, but these girls definitely have the mental toughness that it will take to win the championship.”

Fresh from their 3-0 test series triumph over Barbados in June and a clean sweep of their matches against the Berger Elite All Stars only a couple of weeks ago, the Girls are on a high heading into the World Cup, set for August 7-16 in Sydney. As it turns out, the tournament will also mark the final hurrah for McIntosh on this life-changing Jamaican odyssey, which officially ends in September. What will she do next? “I love coaching, so I am looking forward to working with some of the local teams when I return home,” shares the sixty-something McIntosh, whose current home is based in Canberra.

Looking ahead, Jill says that when her final day in Jamaica arrives she will be boarding her flight with the assurance that what she’s left behind will be built on for the future growth of netball in Jamaica. “I’m confident that the coaches will be able to continue the programme and develop it further without me,” she says with a river-wide smile. “They’ll be just fine.”