BEAUTY OF THE WEEK: New Miss J’ca World sets the record straight on her ‘crowning glory’ 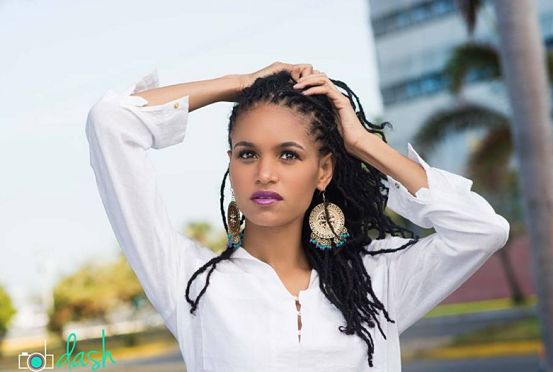 I AM NOT MY HAIR: "I think everybody is entitled to express who they think they are," reflects Myrie, 24.

Natural beauty and newly crowned Miss Jamaica World, Dr. Sanneta Myrie, is a stunner in every sense of the word. Though her gorgeous and stylishly coiffed sister-locks represent a mere fraction of her appeal, people have hardly commented on anything else since she won the 2015 crown inside the Montego Bay Convention Centre on Saturday night. While the fair-skinned Myrie seems neither bothered nor distracted by all the chatter, she makes it clear that there’s much more to her than her conversation-starting ’do.

“I lock my hair because I identify with it. I am very much rooted in that Afro-centric nature, where we as Jamaicans [come from]. I think everybody is entitled to express who they think they are and dance to the beat of their own drum,” the 24-year-old medical doctor tells The Gleaner’s Janet Silvera. “However, I want people to see me for what I have to offer, which is my presentation, intelligence and charitable work.”

By all accounts, she’s the kind of girl who walks the walk. Living up to the ideal of beauty with a purpose, Myrie dedicates much of her free time to mentoring at-risk youth in Kingston’s volatile Craig Town community, a project she hopes to develop, thanks to this new platform. “I hope winning will enrich my story,” she says, “and will be a tool that inspires young people to be what they aspire to be, knowing that their dreams are valid in becoming greater versions of themselves.” Spoken like a true lady.

In addition to the dazzling and highly coveted crown, Myrie was awarded a University College of the Caribbean (UCC) scholarship, a Miss World wardrobe, cash and jewelry, among other cool prizes. Emerging the judges’ pick over 19 other worthy contenders, she will vie for the global title when she represents Jamaica in Sanya, China, in December.

As Myrie tells it, getting to rep the black, green and gold on an international stage is simply a dream come true. “Winning was something I had hoped for because I am very passionate about being an ambassador for Jamaica,” she says, “representing my country and putting our culture on display.”