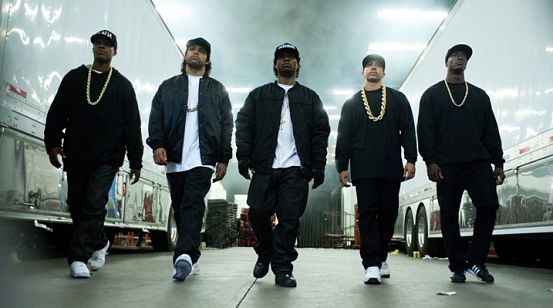 STAR QUALITY: Walking tall, the bandmates know how to make an entrance.

The collision of raw talent, fame and brotherhood lies at the heart of Straight Outta Compton, a solidly written and strongly acted biopic and docudrama that chronicles the true story of the rise and the collapse of NWA, the first supergroup out of Los Angeles and one of the pioneers of hip-hop music and hardcore gangsta rap.

In the tradition of critically acclaimed predecessors like Hustle & Flow and Notorious: The B.I.G Story, Straight Outta Compton examines how, in spite of the harsh socio-economic realities in the ‘projects’ and a pall of hopelessness, talent and perseverance wins out in the end and forever transforms lives.

Directed by music video pioneer F. Gary Gray and set in the latter half of the 198s (into the early 90s), the film introduces us to the friendship that brought together talented teenagers Andre ‘Dr. Dre’ Young (Corey Hawkins), Eric ‘Eazy-E’ Wright (Jason Mitchell), MC Ren (Aldis Hodge) and Ice Cube (played by real-life son O’Shea Jackson Jr.) – and shows how the combination of hard work and passion for spitting rhymes and hard-hitting lyrics catapulted them to the top of the hip-hop hierarchy before money trouble and disloyalty eventually tears them apart and sends them their separate ways.

But not before we witness some sobering accounts of gang violence, racial tensions and shocking instances of police harassment and brutality, including the infamous Rodney King incident that sparked the L.A. Riots in 1993. Hip-hop heads, meanwhile, will appreciate the lowdown on the real Suge Knight and how his Death Row Records empire came into existence. We catch glimpses of before-they-were-stars Snoop Dogg and Tupac Shakur and learn of NWA’s (Caucasian) manager Jerry Heller (Paul Giamatti, sporting a beer gut and a blonde dye job) whose shady business practices contributed immensely to the group’s collapse.

Though clocking in at just under two-and-a-half hours, the movie (co-written by S. Leigh Savidge and Sheldon Turner et al) moves at mercurial speed, squeezing in countless details from the period. The dialogue occasionally feels stilted but you are riveted watching the bandmates as they rip the stage on tour, clad in their black hip-hop gear, the massive arena crowds falling under their spell. The film’s soundtrack should have little difficulty topping the Billboard Hip-Hop Chart later this year.

The movie’s strongest asset is the convincing performances of these young, relatively unknown actors, playing future rap legends heading into their prime. As Ice Cube, Jackson is a dead ringer for his dad. As Dr. Dre and Eazy-E, respectively, Hawkins and Mitchell deliver some nuanced and compelling work. A whiz behind the camera, Gray brings it all together splendidly, fusing the music, the drama and the spectacle into one compulsively watchable and applause-worthy cinematic experience. Tyrone’s Verdict: B+

Email ThisBlogThis!Share to TwitterShare to FacebookShare to Pinterest
Labels: At the Cinema, Biopics, Current Cinema, Flick of the Week, Movie Reviews