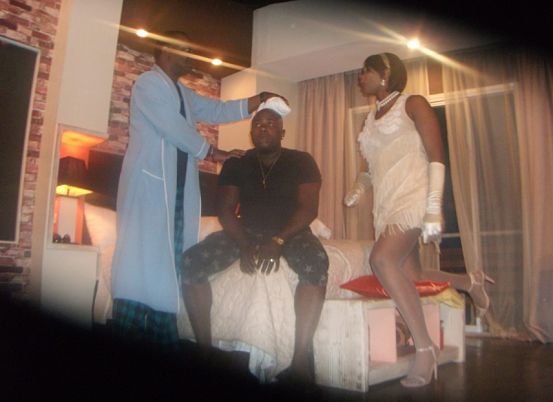 DON'T 'BABY' ME: Campbell, Wilson and Davis sharing a scene from the hit play.

Let the bachelor beware. That’s one possible conclusion many will draw after taking in The Baby Scam, a side-splittingly funny and superbly acted new comedy-drama from Patrick Brown, Jamaican theatre’s most prolific contemporary playwright who just keeps advancing from strength to strength. We’ve long run out of superlatives to describe Brown’s gift for penning stories that surprise, thrill, challenge and satisfy while evoking the highs and lows of Jamaican life, his clear-eyed lens sharply focused on the mundane, the momentous and the scandalous.

The action here unfolds inside a luxurious room on the eighth floor of a high-end hotel in Ocho Rios, where Rocky (Wilson), a successful salesman, is attending a work-related conference. His best friend Scrappy (Campbell) is staying in an adjoining room, getting into all kinds of “stuff.”

There’s a knock on Rocky’s door and in saunters Trixie (Deer), a drop-dead gorgeous piece of eye-candy outfitted as a naughty French maid ready to seduce. She identifies herself as an escort. “Your boss sent me up here to make you happy,” she tells him in her sweetly disarming voice. Declaring that he’s “happily married” to Bree (Elise) back in Kingston, Rocky politely declines her invitation for some wild fun, but Scrappy (who will “sleep with anything as long as it don’t have more than two foot”) is very interested in Trixie’s bag of tricks, and a frisky game of cat-and-mouse ensues in the hotel room.

But before long, the fun and games take a serious turn when Trixie reveals the real reason for her visit. Turns out she and Rocky are not exactly strangers meeting for the first time. She “entertained” him at a stag party a few months prior, and now she may be carrying his child! Things only grow more awkward and intense when Trixie’s big sis Lilah (Davis), a tough cookie/free spirit with a flair for dress-up (She comes as Sophia Loren!) makes her grand entrance and begins to make all sorts of demands on behalf of her pregnant sister. Where Trixie is kind-hearted and diplomatic, Lilah can be brittle and highly aggressive.

So what really happened on that night in question? Are these sisters simply women fighting for ‘justice’ or a pair of gold-diggers who’ve trapped a hapless victim with deep pockets? As you can imagine, fireworks ensue when Bree pays them all a surprise visit and learns of her husband’s indiscretions.

Brown seems less interested in pointing fingers than painting a realistic and highly entertaining portrait of deception and desperation, infidelity and the ties that bind. Next to the appealing set design and effective directorial choices, the script is first-rate storytelling, and the actors get plenty of hilarious lines to deliver. Especially Campbell as Scrappy, whose every utterance sends the packed audience into stitches. Davis, too, displays an excellent command of the comedic and the dramatic in her performance that recalls her fierce turn in Funny Kind ‘A Love.

Emerging as a captivating leading man, Wilson is a towering presence onstage and shares a delightful chemistry with Deer, who nails Trixie’s blend of seductive allure and vulnerability. Elise delivers more of that Sonya Lee sophistication, but with way more grit and grace this time around.

Even though a glimpse at that infamous bachelor party would have provided us viewers with a nice flashback moment, there is next to nothing to complain about. The Baby Scam wins you over with its awesome blend of high drama and hilarity – and the creative flair of a veteran writer who knows his audience way too well. Tyrone’s Verdict: A-