STEPPING UP: Jhaniele Fowler-Reid talks about going back to school, lessons from Sydney, and what the future holds 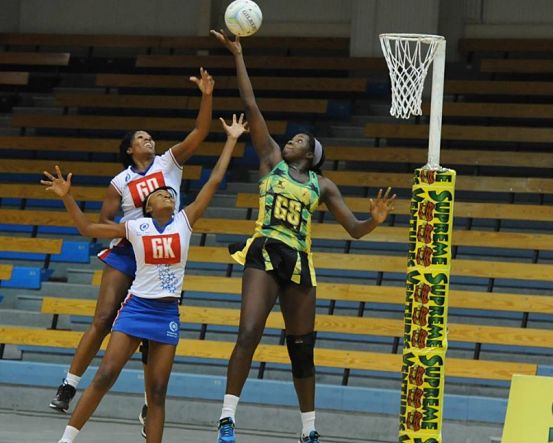 ON THE BALL: Fowler-Reid in action for the Sunshine Girls inside the National Indoor Sports Centre.

Fresh from a bittersweet experience at the exhilarating World Cup of Netball in Sydney, Australia, ace goalshooter Jhaniele Fowler-Reid is about to embark on a new journey, ticking yet another item off her bucket list: pursuing a Bachelor of Science degree in Guidance and Counselling, at the Mico University, no less, where she’ll join fellow Sunshine Girls stars Vangelee Williams and Nicole Dixon on the collegiate squad. As she gets ready to hit the books, TALLAWAH rang up the 26-year-old St. Hugh’s High alum to talk about her future plans, what went wrong for the Girls in Sydney, handling disappointment, and the road ahead.

TALLAWAH: All the best with your upcoming studies at Mico. You opted to pursue a degree in Guidance and Counselling. Why that field?
Fowler-Reid: A lot of people don’t know that that’s the kind of person I am – a very caring and nurturing individual. I’m always looking out for others, so that’s one of the reasons why I chose that field.

TALLAWAH: What are your post-university plans?
Fowler-Reid: More than likely I will be pursuing a career as a counsellor, maybe work at a high school. It’s something I am passionate about so anything to do with that field would be fine.

TALLAWAH: Do you have other career-related plans in the pipeline?
Fowler-Reid: There are some other goals that I want to pursue after I’m finished with the degree programme, but right now I’m focused on my studies. I also want to give back to netball and the country by helping with the development of the sport in whatever way I can.

TALLAWAH: How would you sum up the Sunshine Girls’ recent sojourn in Sydney at the Netball World Cup?
Fowler-Reid: Honestly, it was a very good experience, a very good tour for the team. The type of energy and camaraderie that was in the camp was not displayed on the court. We did our best. We just did not get the outcome that we wanted, which was to bring home a medal and make the country proud. It’s just unfortunate. We are a young team, and I think we are heading in the right direction. We just need to go back to the drawing board, work on a few areas and correct our mistakes.

TALLAWAH: Some have been calling for the resignations of the coaches and for Netball Jamaica president Marva Bernard to step down. What’s your take on all that?
Fowler-Reid: I don’t want to comment on that.

TALLAWAH: But you have heard the criticism. Do you agree with what is being said?
Fowler-Reid: No, I don’t agree that they should resign. I felt that they did what they could, and they are good coaches. As I said, we just didn’t get the results that we wanted.

TALLAWAH: Have you spoken to any of your team-mates since you returned home?
Fowler-Reid: We always talk to each other. The energy is still there, but the [loss] is still fresh in our minds. So most of us are still feeling down. We really wanted to bring home a medal. It just didn’t happen for us this time.

TALLAWAH: Looking ahead, how do you hope to end 2015?
Fowler-Reid: For the rest of the year, I don’t have any major games, so I’ll get some rest and focus on my studies. I think my year will end well.