BOOK OF THE MOMENT: Grace Jones recounts her glam-and-glory days in I’ll Never Write My Memoirs 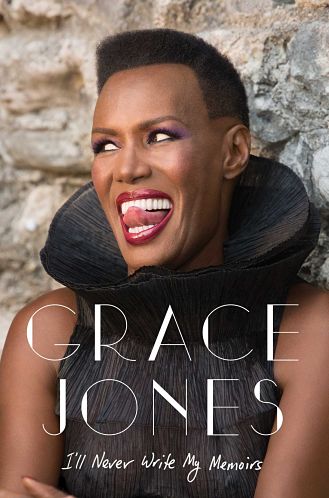 CHAPTERS OF HER LIFE: Jones' new book details her colourful, eventful journey to the top.

The one and only Grace Jones has always lived her life on her own terms in big, bold hypervivid colours, so no surprise that her first autobiography, I’ll Never Write My Memoirs, is a candid reflection of all that – and way more. The diva spares no punches, dropping names and dishing up the years that saw her transformation from fresh-on-the-scene model to creative powerhouse to global sensation.

Ever since the blogosphere got wind of the tell-all, being released this month in hardcover by Gallery Books and co-written with author Paul Morley (Words and Music: A History of Rap in the Shape of a City), the buzz has been deafening. Clearly worth the long wait. And, so far, no complaints under the heading “Too Much Information.”

According to online sources, Jones loyalists and the curious-minded are in for a royal treat – an unforgettable peek into the world of a woman hailed as disco queen, gay icon, game-changer and gender-bending iconoclast. In short, one of the world’s most recognizable artists.

How did a young girl who leaves Jamaica at age 12 and finds fame as a fashion model in 70s New York parlay these small early triumphs into a bonafide success story spanning stints that led up to Andy Warhol’s Studio 54 in its prime and towards becoming recording superstar, provocateur and the ultimate showgirl? (“I had no childhood,” Jones informs her readers, “I’m having it now.”)

For countless admirers, Jones remains a soul survivor like none other, and the book, racking up nearly 400 pages, allows us to witness some of those whirlwind experiences – in her own words. In these candid reflections, Jones tells us about lovers come and gone, her constant quest for the new and the next, and the free-flowing social circle of fashionistas, artists and musicians that helped fuel her electric energy.

Grace, now 67, addresses rumours new and old, her diva reputation (including the many movie roles she turned down), and even stirs some controversy as only she can, name-dropping with wild abandon. By all appearances, Grace Jones not only has a hit on her hands but a how-to guide for living out loud.

“Her reflections are a passionate reminder of the fabulous, decadent and manic coupling of life and art,” Kirkus Reviews proclaims. In one stroke, another reviewer manages to perfectly capture the rebel and the renegade. “I’ll Never Write My Memoirs follows this ageless creative nomad,” he notes, “as she rejects her strict religious upbringing in Jamaica, conquers New York, Paris and the 1980s, and lives to fight again and again.”