HISTORY IN THE MAKING: Kingston welcomes the Simon Bolivar Cultural Centre, a landmark symbol of legacy and liberty 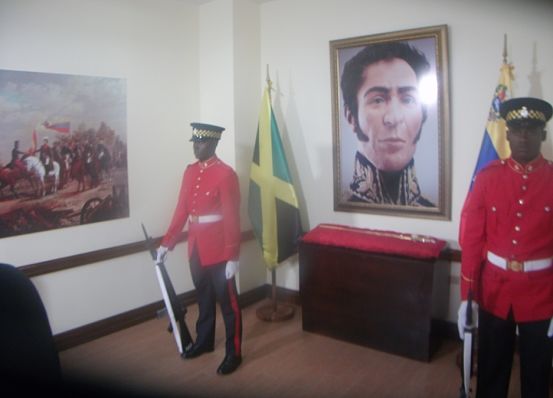 SHOW PIECE: A range of historical paraphernalia greets visitors upon entering the centre.

On Sunday, September 6, the Simon Bolivar Cultural Centre was officially opened at North Parade in Downtown Kingston – ribbon-cutting and all – before a sizeable crowd of local, regional and international dignitaries, Jamaicans from all walks, and a phalanx of paparazzi-style photographers. It was a landmark moment in Caribbean history, coming exactly 200 years after Bolivar, the Great Liberator as he was famously known, penned the ‘Jamaica Letter’ (Carta de Jamaica) while in exile here on this island cooling his heels, clearing his head and outlining his ideas for Latin American unity.

A beautifully designed structure, boasting world-class architecture and gorgeous interiors, the Simon Bolivar Cultural Centre is one way Jamaica is honoring the man’s legacy and strengthening ties between us and the Bolivarian Republic of Venezuela, 50 years after we first started diplomatic relations.

What’s more, the cultural centre was funded by the Venezuelan government through a partnership between the Banco de Desarrollo Economico y Social De Venezuela (BANDES) and the PetroCaribe Development Fund. It was constructed by the Urban Development Commission (UDC) and later handed over to the Institute of Jamaica.

When asked how the centre will benefit the people of Jamaica, Ann-Marie Bonner, the Institute’s executive director, said the aim is to promote a deepening of the ties that bind Jamaica to its South American ally. “I hope when Jamaicans come to visit the centre they will learn more about our shared history and our different cultural experiences,” Bonner tells TALLAWAH. “The centre will be used for exchanging and sharing information to benefit both Jamaicans and our Latin American neighbours.”

For Kingston’s mayor, Dr. Angella Brown-Burke, the Simon Bolivar Cultural Centre is a much-welcomed addition to the Downtown landscape at a time when modernization is the buzzword. “It’s a key component in the redevelopment of Downtown Kingston,” she noted in her remarks, “and an important contributor in keeping Kingston the cultural capital of the Caribbean. We hope the operations of the culture centre, as a public space, will be drawing visitors from near and far.”

On the inside, you’ll find gigantic photographs of former Venezuelan president Hugo Chavez, vivid life-size portraits of Bolivar, a printed copy of the Jamaica Letter, the sword room, a manager’s office, walls adorned with lush paintings and a series of historical paraphernalia. According to historian Dr. Verene Shepherd, who was among the many noted academics who turned out for the ceremony, it’s imperative that the history is accurately portrayed. “It’s a very important cultural centre, and if the information is accurately collated and represented,” Shepherd tells TALLAWAH, “it will provide a critical history lesson about Bolivar the man, Bolivar the ideologue, and Bolivar the hemispheric liberator.”

Aged 43 at the time of his passing, Simon Bolivar is considered one of the most important figures in world history. Between 1810 and 1825, he liberated six countries from Spanish colonial rule, including his native Venezuela. A lover of the Caribbean region, he spent May-December of 1815 in exile in Jamaica and spent time in Haiti as well. As far as current Venezuelan leader, Nicolas Maduro, is concerned, Bolivar’s role in the fight against colonial oppression makes him a timeless hero and a larger-than-life figure we can never forget. “This man has not and will not be forgotten. His cause has not been forgotten. His struggle has not been betrayed,” President Maduro noted, as he addressed the ceremony on Sunday. “We can still find the ideas and the pain of this man who was at the heart of this Great American Cause.”

Against this backdrop, Prime Minister Portia Simpson-Miller made it clear that her government remains committed to further bolstering relations between Jamaica and Latin America – and keeping Bolivar’s legacy alive. The cultural centre, she noted, will have its role to play. “Present and future generations of Caribbean people will learn about the life and contributions of the great liberator whose principles, like our Marcus Garvey, have enlightened the world. Bolivar’s ideas will be kept alive in Jamaica,” PM Simpson-Miller said. “Today, his importance to our region is being enshrined in this cultural centre.”