PUTTING ON A SHOW: Jamaican students get a thrill out of shaking up Shakespeare 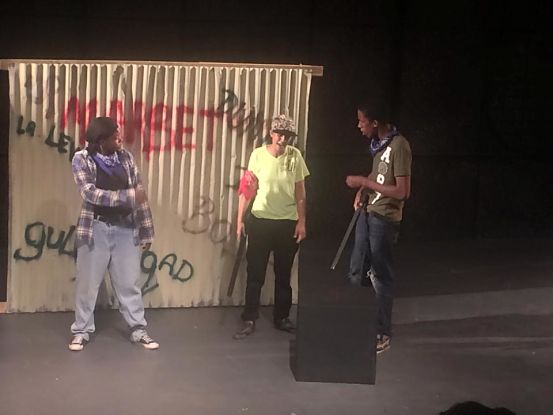 MAKING A SCENE: Student actors from Campion College performing their version of Macbeth. (below), accepting the winner's trophy from Dr. Tony Sewell.

Jonkanoo, stand-pipe ghetto living, Bobashanti Rastafarianism. These aren’t ideas one associates with the work of the legendary William Shakespeare, but the supercreative and extremely energetic kids who participated in the national finals of the inaugural Shakespeare Schools’ Championship in Kingston on the weekend didn’t shy away from bringing the outrageous, the curious and the downright hilarious to the stage as they did their best to Jamaicanize some of The Bard’s most popular works.

Unsurprisingly, the student actors (who collaborated during the preparation process with their drama and literature teachers and mentors like Leonie Forbes and Dr. Brian Heap) had a blast while putting their shows together and bringing them to life on the main stage.

“It was pretty interesting. The fun challenge was that we had to Jamaicanize the play without changing the words. It took us a really long time to get it right, but the hard work was worth it because we made it to the finals,” shares 18-year-old Romari Samuels, who played the title character, Antonio, in Kingston College and St. Hugh’s entertaining spoof of The Merchant of Venice, which won second place. “Shakespeare’s language is a bit difficult to comprehend but we a lot of doing it our way.”

While KC and St. Hugh’s scored high marks and won big laughs for their version of Merchant, Campion College brought the house down with their ghetto-fabulous update of Macbeth – complete with zinc fence, stand-pipe and area dons. Glenmuir High, meanwhile, gave Othello an urban-meets-thug life remake, the American International School of Kingston spruced up Henry V, Wolmer’s High (Boys & Girls) brought pizzazz to The Taming of the Shrew, Waterford High jazzed up A Midsummer Night’s Dream, while Ardenne High offered their own visceral and innovatively crafted version of Macbeth.

Sixteen-year-old Danaia Brown, who starred in Fabian Barracks’ Force Ripe at The Theatre Place earlier this year, was a bonafide scene-stealer as one of the three witches in Ardenne’s Macbeth. “I had never played something so dark and eerie before so it was fun getting into that frame of mind,” Brown says of getting to widen her range as a budding thespian. “At first it was difficult to lose myself in the role, but eventually I overcame the challenge. The experience was constructive for me as an actress.” 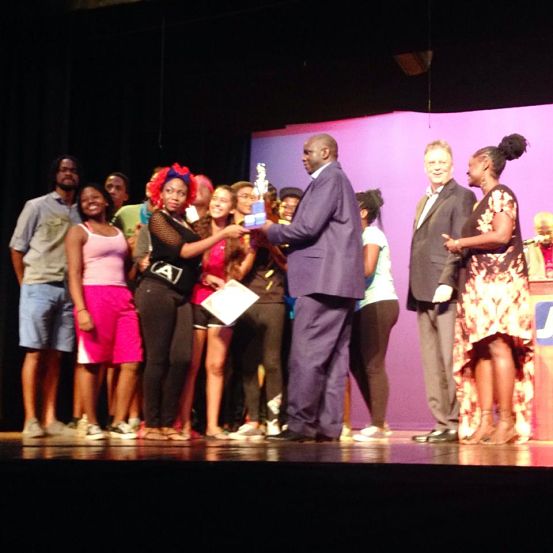 First-time actress and Grade 11 student Amelia Howell of Waterford High cherishes the experience of witnessing one of her favourite stories come to life – and being a central part of the action. “I loved the play and I love the character, so when I heard that Miss was going to let us perform it, I was so excited,” recalls the 16-year-old who played Titania in Midsummer Night’s Dream. “I have never done anything like this before in my life. I enjoyed the experience, especially when I heard the audience enjoying what we were doing.”

Campion may have won the inaugural competition, but their journey to the top was far from smooth. “A major challenge for us was that we had to switch casts and we already had very little time to work with. But we stuck with it,” explains leading man Dimitri Grant, 16, who played Macbeth. He credits a total team effort for the victory. “Working together we had our ups and downs but we pulled through,” he says. “We gave our best, which really helped us.”

Chief judge and Director of the School of Drama, Eugene Williams, had nothing but high commendation for the young performers. In his own words, he was beyond impressed by their efforts. “Their level of emotional intelligence and commitment and expressiveness was very admirable,” Williams reports. “They stepped up to the plate and did a really good job. This kind of competition is something I would like to see continue in the development of our students.”