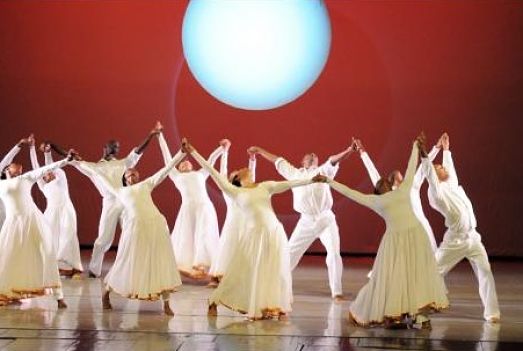 LEAPS OF FAITH: Performers grace centrestage during the company's latest season at the Little Theatre.

Choreographer Christopher Huggins’ 2013 opus “Mothers of War” may be the perfect example of how a dance work is akin to putting on a minimalist theatrical production. We are looking for compelling narrative, powerful performances and strong imagery to pull viewers into the story. Huggins’ work achieves this with distinction and set the bar high for the rest of the choreographers who contributed to Movements Dance Company’s spellbinding, evocative 2015 season at the Little Theatre in Kingston on the weekend.

We thoroughly enjoyed “Mothers of War,” centred on a mother-and-son duo, as the boy (a terrific Levi Marsman) prepares to depart for battle, leaving the mother (the divine Jade Arscott) inconsolable. The pace quickens as the other mothers appear onstage to comfort her and the rest of the sons, clad in military gear, take their turn in the spotlight, bringing impressive vigour to the piece.

With his alternately hyperkinetic and graceful choreography, Huggins potently captures the emotional turmoil that army mothers must face when it comes to sending their sons off to the frontlines, real or imagined. As a bonus: the musical score is cinematically epic and is apt for the whole war theme and the idea of embarking on a long journey, struggle and survival.

Huggins also happens to be the visionary behind 2011’s “The Wrath of God,” perhaps the most popular and rousing piece in the Movements canon – and it isn’t hard to see why. Gripping and electrically charged, the piece (set to Carl Jankins’ Requiem) depicts the choreographer as provocateur and his all-black-clad dancers as warriors, who look like they would trample you to bits if you dare get in their way.

Of the three new works that were presented, two were choreographed by Artistic Director Monica Campbell McFarlane. While Leesa Kow earns kudos for the poise and free-spirited energy she brought to the solo “On Eagle’s Wings”, we were nothing short of transfixed by the company’s youthful exuberance that made an unforgettable highlight out of “Searchlights”, driven by Barrington Levy’s haunting voice. A nice balance of teenage angst and dramatic intensity, “Searchlights” (about at-risk youth and ‘ragamuffin soldiers’) comes off as a very physical piece boasting robustly athletic choreography – a sure sign that McFarlane is starting to embrace aesthetics outside her comfort zone of grit-and-grace movements.

Using music by Pharrell Williams (“Freedom”) and Geoffrey Oryemi (“MaKambo”), Michael Holgate delivered the splendid piece “Ubunto”, which combines African influences and exuberant razzle-dazzle, while exploring themes of liberty and identity. To say the least, it’s a winning and infectious piece bearing the Holgate signature of energy and a sense of enlightenment.

And that’s as ideal a way as any to describe the overall presentation – complete with McFarlane’s ethereal “Bread of Life” – a rhythmic, passionate and hugely enjoyable show that lived up to expectations and earned its round of lingering applause.