A MAN WITH A PLAN: The Walk takes you on a fascinating high-wire journey 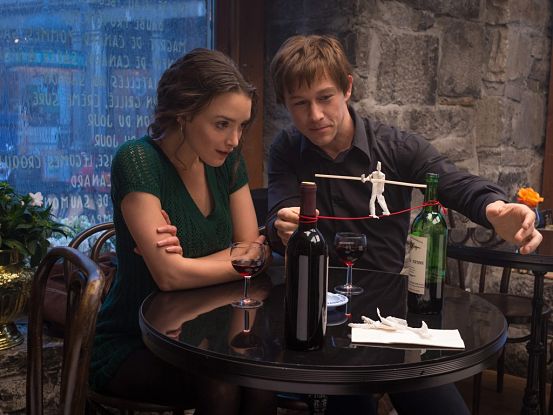 STEP BY STEP: Gordon-Levitt gives Le Bon a preview of his daring feat in this scene from the film.

Philippe Petit had a dream. A dream that soon took shape as an obsession. He’s never wanted anything so badly in his life: to hang a wire between the two sky-scraping World Trade Centre Towers in New York City and perform a death-defying, tightrope-walking act. True, this sounds like the fantasy of someone who’s gone off the deep end, but Petit, a Paris native, is no madman. He’s quite sane actually, just possessed of dogged determination, stubbornness and a quitting-is-not-an-option mentality.

To make his World Trade Centre dream come true, no obstacle will stand in his way. Even if that means rounding up a crew, wearing tonnes of disguises, and sneaking into the Towers at dead of night. “It’s impossible, but I’ll do it,” he states emphatically. “It will be the artistic coup of the century!” Simply put, that’s what makes his story so fascinating.
You’ll no doubt feel the same way – and probably have a good laugh or a head-scratching moment or two – while watching The Walk, the big-screen 3D version of Petit’s book, To Reach the Clouds (set in 1974), which comes to life thanks to visionary filmmaker Robert Zemeckis, who directed the film and co-penned the screenplay.

It’s an engrossing, highly entertaining watch, spun with humour and art-house finesse and anchored by sharp, convincing work from Joseph Gordon-Levitt, whose transformation into the French “artist” is a fine study in characterization and Method acting. Though Joseph’s grasp of the accent is a bit spotty, given his commitment to the role he still passes for a real Frenchman.

The same could be said of Sir Ben Kingsley, who plays Petit’s tough-as-nails mentor-teacher, a circus veteran who goes by Papa Rudy, and who gives the dream his blessing after some convincing. “I may not understand it,” he concedes, “but it’s something beautiful.” Petit’s ubersupportive indie-musician girlfriend Ani (the lovely Charlotte Le Bon) tells him, “You shouldn’t care what others think.”

With Ani and “official photographer” Jean-Lou (James Badge Dale) in tow, Petit (who became enamoured of tight-rope walking after a trip to the circus at age eight) flies to New York to create history on the world’s most spectacular stage.

With a master like Zemeckis (Forrest Gump, Cast Away) behind the camera, The Walk lucidly captures the series of events leading up to Petit’s big now-or-never moment, while zoning in on the emotional and psychological factors at play, transforming the movie into a story with a beating heart. At the same time, the film works because Gordon-Levitt (Inception, Looper, 500 Days of Summer) is such a versatile and appealing leading man who can crack wise one minute and then turn on the dramatic intensity the next.

In the end, The Walk raises pertinent questions about security and public safety, but audiences will enjoy being distracted by the fulfillment of a dream one has to see to believe. By and large, it’s a vivid and inspiring portrait of how keeping your eyes on the prize can take you to new heights. Tyrone’s Verdict: B+