A ROCK AND A HARD PLACE: Ratoon mixes family saga with socio-political commentary for an entertaining whole 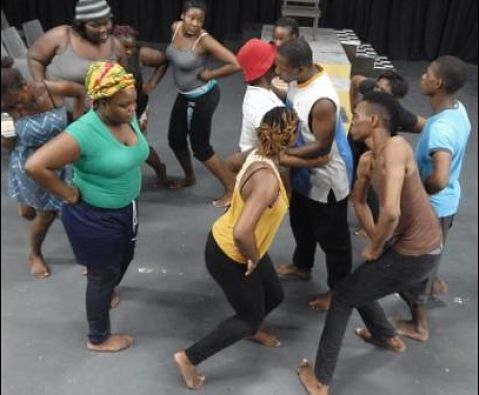 FULL CIRCLE: Cast members blending movement and singing in a scene from the play inspired by the work of Erna Brodber.

A young girl’s coming-of-age and sexual awakening lies at the heart of Ratoon, a new drama by the Edna Manley College’s School of Drama, best described as an off-shoot of Erna Brodber’s classic 1989 novel Jane and Louisa will Soon Come Home. It is brought to the stage at the Dennis Scott Studio Theatre with electric energy, humour and melodrama by a devoted cast of promising student actors, who bring the show to life under the watchful gaze of Carolyn Allen.

But Ratoon is by no means a flaw-free production: the claustrophobic staging robs the piece of much of its expressiveness and the monotonous costuming, in particular, makes the whole thing feel one-dimensional. But its heart is in the right place, offering viewers a frank and unflinching meditation on class relations, Jamaican cultural heritage, family tradition, notions of womanhood and self-worth and what it means to have roots. The intermittent socio-political commentary gives it balance.

The name ‘ratoon’ refers to the leaves and stems that grow back after a plant (usually sugar cane) has been pruned. Small wonder then that ideas of regeneration and rebirth, as well as the incessant refrain, “building a new Jamaica,” course throughout the play.

Raised on her iron-willed Aunt Becca’s (Shanthele Simms) preaching of upward social mobility yet deeply influenced by her father’s (Rajeave Mattis) staunch devotion to nation-building, starting at the community level, the impressionable Nellie (Christina Mason) finds herself caught between a rock and a hard place when it comes to making plans for her future.

She gets a scholarship to attend university but feels torn between two vastly dissimilar male friends – the wise and conscious Baba (played by Derrick Clarke), who has Med School ambitions, and Noel Spence (Yohan Reynolds), who knocks her up in more ways than one. “Woman luck deh ah dungle heap,” someone informs her. As soon becomes evident, Nellie (a meaty role for the competent Mason) is a mass of contradictions – and the same play could be said of the play itself, which equally sprouts family values and heavy ideology centred on divisive issues of the day.

The show’s shortcomings aside, the young actors (clad in all black) take to their roles with gusto, none more so than the female quartet, who amusingly portray the play’s Four Fat Women. One of the play’s strongest assets, there is amply humour (traditional singing and movement as well) to go around.