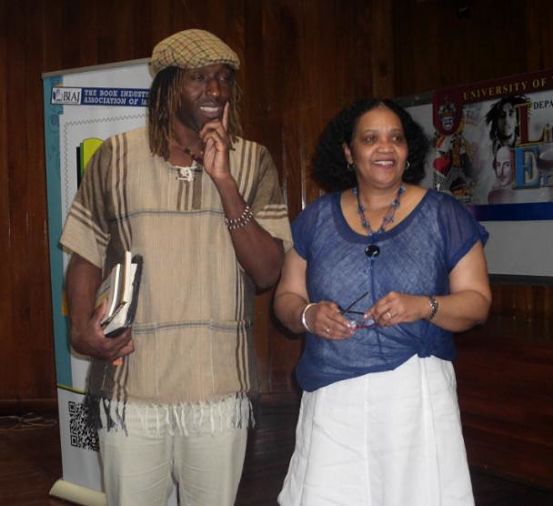 TWO OF A KIND: Miller shares the frame with Lorna Goodison at the 2013 Kingston Book Festival-sponsored event “An Affair with Literature inside the Neville Hall Lecture Theatre, UWI Mona.

When the inaugural Lignum Vitae Awards are handed out Sunday, November 8, during a presentation being hosted by the National Gallery of Jamaica, close to ten writers (a mix of established names and newcomers) will be hoping to hear their names called when the big winners are announced.

No strangers to picking up accolades for their work, prolific novelist/poet Kei Miller (well known for The Last Warner Woman) and in-demand playwright Patrick Brown (this season’s The Baby Scam) lead the pack of Jamaican scribes who’ve scored nominations. Both are up for the Una Marson prize. While Miller, whose oeuvre also includes The Fear of Stones, Writing Down the Vision and the Forward Prize-winning A Choreographer Tries to Map His Way to Zion, is a nominee for his latest novel Augustown, Brown got a nod for The Cherry Picker.

Carrying a handsome cash prize of $500,000, the Una Marson Award is also being contested by Garfield Ellis (The Angel’s Share), Sylvia Gilfillian (The Road to Timnath) and Dana Hemans (Tea by the Sea).

The Vic Reid Award, valued at $250,000, has only two nominees: Paula Lennon’s The Titchfield Turnabout and Diana McCaulay’s Gone to Drift. Similarly, just two authors are up for the Jean DaCosta Award (accompanied by a $250,000 cash prize): A Different Me: A Better You by Janet Morrison and Duppy in the Wardrobe by Helen Williams.

According to organizers, more than 40 entries were submitted for consideration. This year’s sponsors for the Lignum Vitae Awards, conceived to reward excellence among Jamaica’s wave of literary artists du jour, include the Broadcasting Commission and Jamcopy. 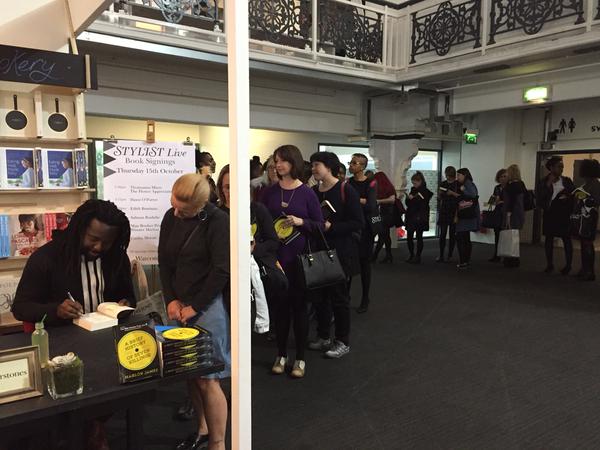 > SIGN ME UP: Armed with fresh copies of A Brief History of Seven Killings, a large crowd turned up at Stylist Live, one of the biggest book events in the UK, on October 14, to have face-to-face time with Man Booker Prize winner, Marlon James, who was kept busy supplying autographs. "It was the most exciting book on the shortlist," chief judge Michael Woods reports. "It was a unanimous decision. There are many voices in the book, and it just kept on coming."