CLIMB EVERY MOUNTAIN: Based on true events, Everest delivers a shock-and-awe spectacle 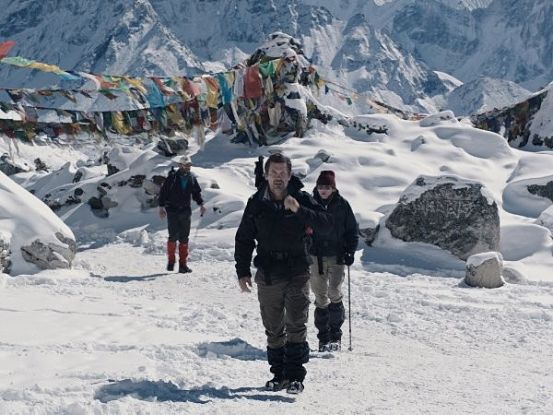 ICE COUNTRY: Josh Brolin, as Dallas native Beck Weathers, in a scene from the action-adventure drama.

“There is competition between every person and this mountain, but the last word always belongs to the mountain.” Fair warning. That’s a telling line issued midway the new action-adventure drama Everest, which takes its name from the highest point on planet Earth. The lengthy 3D film, directed by Baltasar Kormakur, chronicles the tragic, yes-it-really-happened incident in 1996, where a group of mountaineers on their way from the summit lost their lives in a blinding snowstorm.

Counted among the dead was Rob Paulson, the charismatic and heroic team leader who helmed the expedition and who is played here with verve and steely resolve by Jason Clarke (Zero Dark Thirty). Jake Gyllenhaal (all beard and hippie chic) plays Scott Fischer, the other team leader. Exploring themes of family, courage and the perpetual saga of Man vs. Nature, Everest reminds us that, in spite of that admirable spirit of adventure that so often threatens to overwhelm us, some roads are best left untravelled.

Watching the horror of the disastrous weather conditions (frightful blizzard, freezing temperatures) snuffing out the lives of these thrill-seekers, you feel for their relatives back home – women like Rob’s pregnant, distraught wife Jan (Keira Knightley), whose child (named Sarah in keeping with Rob’s wishes) never got to meet her father, and Peach Weathers (Robin Wright), whose blunt and get-things-done mentality spurred the American and Tibetan authorities into action and got her badly bruised husband (Josh Brolin as Beck Weathers) back on American soil, via helicopter, to the safety of his Dallas home and to the welcoming arms of his two young children.

“Why are you climbing Everest?” Yasuko Namba, the 42-year-old Japanese woman in the group said she had already climbed six of the world’s seven highest mountains and reaching the top of Everest was next on her list. One Caucasian man offered, “Because I can. To climb it and see a view that nobody else sees, it would be a crime not to.” Doug Hansen (played by John Hawkes) said, “This is my last chance to to do this.” And he was right. Though he made it to the top, he never made it back home.

For me, a movie like Everest (packed with a surplus of special effects, grand-scale 3D cinematography and appearances from other major-league actors like Sam Worthington and Emily Watson) drives home the simple yet hauntingly powerful refrain: To each his own. Tyrone’s Verdict: B

Email ThisBlogThis!Share to TwitterShare to FacebookShare to Pinterest
Labels: At The Movies, Current Cinema, Flick of the Week, Movie Reviews, Talking Films