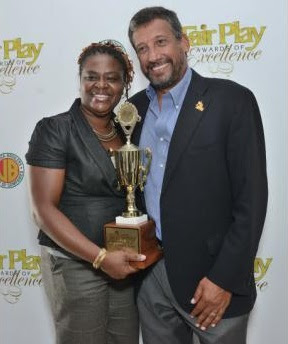 MAKING NEWS: Levy, with The Gleaner's Tameka Gordon at Tuesday's awards presentation at the Terra Novel Hotel in St, Andrew.

For Christopher Levy, the Fair Play Awards amount to this: maintaining impeccable high standards and rewarding excellence in Jamaican journalism, as the professionals in the field diligently seek to enhance the quality of their work. “We recognize the importance that the media has on the national conversation and part of our responsibility is to challenge members of the profession to ensure that their work remains at the highest possible standard,” Levy says. “Journalism has to not only be informative but also relevant to national decision-making.”

After 15 years, the President and CEO says he’s proud of what Jamaica Broilers has achieved in this regard, challenging journalists to rise to the occasion and paying tribute to the best of the best with the kind of reward and encouragement that sweetens labour. “As a company you’re always looking for ways to have a national impact apart from just the growth of your business,” the second-generation businessman tells TALLAWAH, “so I like to think of the Fair Play Awards as a testament to Jamaica Broilers’ commitment in this area. The growth of the awards speaks for itself, and it has more or less taken on a life of its own.”

According to chief judge, Dr. Hopeton Dunn, the 2015 crop of entries (largely human interest pieces) ranked among the most “strong and competitive” he’s encountered in recent memory, which made the adjudication process that much more challenging. A total of seven media houses submitted 30 entries in all (19 in the print category, four in radio and seven for television). In the end, the top prize going ($500,000 and a trophy) went to TV-J’s “Business on Back Road”, which the judges hailed as “a brave and investigative story… well-focused and reported with energy and enthusiasm.” To say the least, the win represents a coup for the consistently outstanding media house’s six-member team comprised of Nadine McLeod, Kirk Wright, Shakir Brown, Talawa Levy, Anthony James and Carlton McCarthy.

Meanwhile, second place went to The Gleaner Company’s Tameka Gordon for her informative piece “NHT Acquires Outameni”, while the third-place award (a tie) went to Global Reporters for the Caribbean/18 Degrees North (“Ordered to Kill?”) and the Nationwide News Network for their “Krauck and Anchor Chronicle.”

Looking ahead, Dunn says a commitment to depth of reporting, fairness, accuracy and balance will take Jamaican journalists, especially the up-and-comers, a far way. “It is always a pleasure,” Dunn says, “to come across work that delve into issues that are having national impact.”