FLICK OF THE WEEK: Bridge of Spies delivers intrigue, conspiracy and fine performances 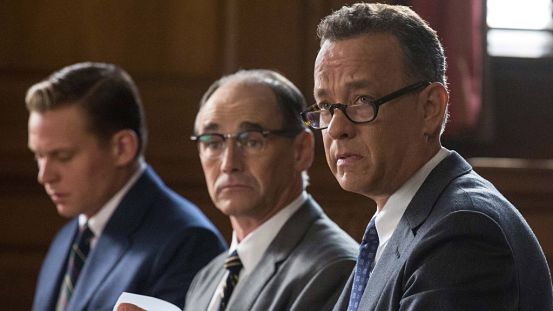 SPEAK NOW: Hanks (right) and Rylaance in a scene from the spy drama.

Dominated by a towering performance from Tom Hanks, Bridge of Spies seamlessly combines elements of the noir thriller and the spy drama to whip up a captivating tale of war and peace, patriotism and global terrorism. It’s masterfully directed by Steven Spielberg and though a tad overlong, the Coen brothers (No Country for Old Men, Fargo) and co-writer Matt Charman do a fine job with the script. But what best accounts for the movie’s core appeal is the intrigue, conspiracy and fascinating series of events (based on real-life happenings) that it chronicles – all the while anchored by Hanks at his imperious best.

Perhaps the most ‘serious’ we’ve seen him since playing Professor Robert Langdon in The Da Vinci Code and the titular hero in Captain Phillips, Hanks stars as Jim Donovan, a Brooklyn-based based criminal lawyer who finds himself in the glare of the public spotlight when he is called on to defend Rudolph Evanovich Abel (Mark Rylance), a Soviet spy caught by the feds and awaiting trial and sentencing. Though at first reluctant to take the case, Donovan chooses to see this as any other case and part of his patriotic duty.

On the surface, he’s a decent, upstanding father figure just doing his job but not even that can save him from the backlash and the steep price his family (Gone Baby Gone’s Amy Ryan plays his put-upon wife, Mary) must pay). In one scene, there house is sprayed with bullets. But it is Jim, of course, who must bear the brunt of the people’s ire when a public outcry ensues. He is branded a traitor defending an enemy of the state. Hero or sellout?

Set in 1957 at the height of the Cold War, when the Soviets and Americans are at odds over nuclear weapons, the FBI and the CIA have bolstered their zero-tolerance approach when it comes to issues concerning espionage, ‘atomic secrets’, and public safety. Over in Berlin, Germany, the East and the West are at each other’s throats.

Working with terrific source material, an accomplished cast (also featuring Sebastian Koch and Alan Alda) and a storied piece of history to explore, Spielberg has little difficulty crafting a cinematic experience that weaves a complex yet engrossing mix of period drama, conspiracy theories and edge-of-your-seat thrills that take viewers from the heart of the US mainland to Europe (the war-torn German, in particular) and back again. It’s quite a breathless ride.

Strongly acted and intriguing to a fault, Bridge of Spies yields undeniable proof that change is never easy nor easily accomplished.