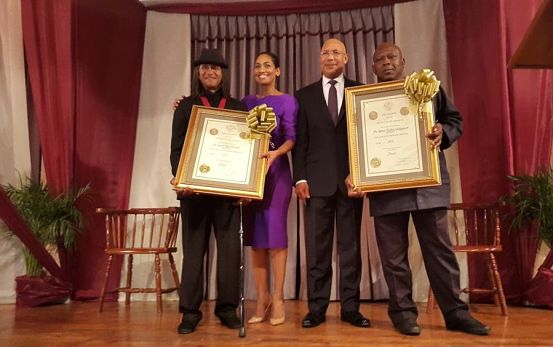 They may be two-time Grammy winners for Best Reggae Album at the Grammy Awards, but for Sly & Robbie, a Gold Musgrave Medal from the Institute of Jamaica symbolizes a level of accomplishment that surprises even them. Past recipients of the Gold Musgrave Medal include Loan Goodison and the late Anthony Winkler. “”It’s a great feeling. We never expected this, but we’ve been putting in the work all these years, taking reggae music to the world, so a major award like this tells you that the work is appreciated by your own people,” the ageless Robert ‘Robbie’ Shakespeare tells TALLAWAH, looking trim and elegant (in a black bespoke suit) and supported by a walking cane, at Wednesday’s medal presentation ceremony inside the Institute’s Lecture Hall in Downtown Kingston.

Sly & Robbie (the Rhythm Twins widely known for their Taxi Records and hitmaking prowess) have been nominated for some 11 Grammy Awards throughout their illustrious career and have reportedly worked on nearly 200,000 singles as producers since the 1970s. They topped this year’s list of Musgrave Medal honorees, which also includes acclaimed US-based historian and novelist Orlando Patterson, the other Gold Medal recipient for 2015, who was unavoidably absent.

To say the least, Dr. Vendryes, who has authored three books, pens a weekly newspaper column and founded Doctors on Call for the MoBay area, was beside himself with glee at being among the eight-member class of 2015. “What an honour! Its antiquity, iconic status and unique value makes being presented with one of these [medals] a truly one-of-a-kind experience,” the good doctor noted in his anecdotal reply on behalf of the awardees. “We are absolutely delighted, but also humbled and sobered by the recognition in such a spectacular fashion as this.”

The Musgrave Medals, in gold, silver, bronze (and a special category for youth), are awarded annually by the Institute of Jamaica (IOJ), in recognition of notable contributions to the fields of literature, science and art in Jamaica and the West Indies. The award was founded in 1889 as a memorial to Sir Anthony Musgrave (Governor of Jamaica from 1877 to 1893), who founded the IOJ in 1879.