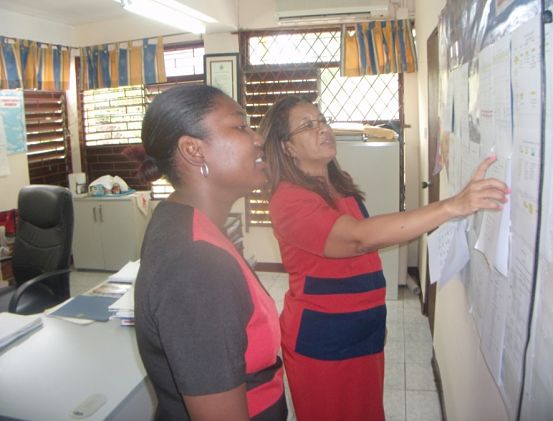 TEAM WORK: Lowe (right) and administrative assistant Marcia Gordon look over growth plans for the institution. (below) A class in progress.

“It’s always an anxiety for parents about lies ahead for their children, but I think the main concern we all have is, ‘Will my child be normal?’” That’s an observation coming from Donna Lowe, principal of the Genesis Academy, a school of excellence for students with learning challenges that’s based on South Camp Road in Kingston – now celebrating 12 years of highly commendable contribution to the education sector.

With an enrollment of almost 100 students (ranging in age from 12 to 25 years), Genesis caters to children readily classified as “challenged” (physically, intellectually, you name it), but Lowe and her devoted staff of 20 (teachers and versatile caregivers) pride themselves on going the extra mile in providing the students with a well-rounded educational experience – an experience that stands to rival what’s available in ‘regular’ schools across Jamaica.

“We work with the mild to the severely challenged, but we follow the same curriculum that is used in the other schools but at a slower pace,” explains Lowe, who has been principal at Genesis since 2012. To Lowe’s mind, what makes Genesis special and sets it apart from other Jamaican-based special-ed institutions isn’t limited to the Christian values they instill in the student body but the dynamic approach the administration takes to education as a whole. As such, exposing the students to wide-ranging experiences for their betterment – from the classroom to the stage to the playing field – ranks highly on their list of priorities.

That perhaps explains why, since 2007, so many of their students have represented Jamaica at the Special Olympics – an achievement too notable to ignore. Says Lowe, “We encourage the parents to put them in sports because like average students they may not excel academically but they may excel in other areas, and what we have found is that a lot of them enjoy sports.” Lowe knows what she’s talking about. Her own son, Jonathan, (now 30 and a past student of Genesis) was a member of the Team Jamaica contingent that took part in the 2015 World Summer Games in Los Angeles, where Jonathan won a gold medal for swimming. His new wife, whom he met while attending the school, won her gold medal for bocce. 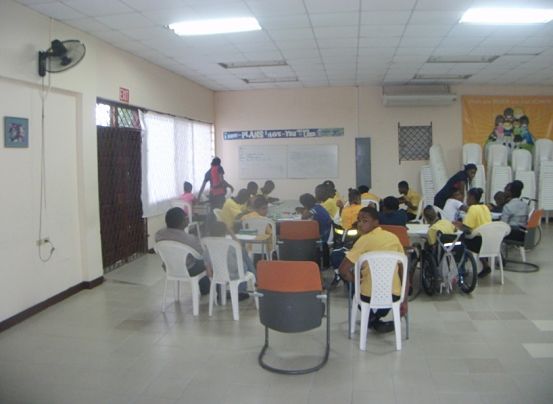 ‘Triumphs’ like these, Lowe confesses, make the daily challenges worth it and provide much encouragement to carry on. What’s more, she says, the sacrifices founder Pauline Beaumont (who started Genesis in her living room on Windsor Avenue) made have paid off ten-fold. “We’re planning to host more parenting seminars because when you think about the extra pressure that parents with special-needs kids are under, they really need all the help they can get,” Lowe, 57, says reclining behind her office desk. “Mrs. Beaumont had the vision to start a school like this, and it’s now a success story. I wasn’t happy with what I saw happening in Jamaica for special needs students until I joined up with her. I was one of the first five parents when the school started in 2003 and it’s one of the best decisions I’ve ever made.”


Building the Genesis reputation is a work in progress. In addition to making improvements to their fund-raising machinery and their academic offerings, ranging from music therapy, art therapy and speech therapy to data operation, commercial food preparation and art-and-craft, Lowe makes it clear that much of their focus rests on what happens to the kids after they graduate from Genesis. “One of the areas in which I’d like to see some serious changes is in the creation of job opportunities for them. I hope the country will progress to the stage where it is mandated that a percentage of the workforce must be represented by members of the disabled community,” she notes. “We can’t prepare them for the working world and them watch as they end up sitting down jobless.”

The efforts of the Genesis Academy staff and the results they produce have not gone unnoticed by the authorities. “We are rather impressed with the administration, the teaching and learning activities, classroom environment, the tone and atmosphere,” the Ministry of Education has said in their assessment. “The school is doing a tremendous job, which is badly needed in this particular area.” As for the future growth of the institution after 12 years, the sky is the limit. “We are growing and I’m thankful. It has been a journey, so we are hoping to be able to build on this,” Lowe says. “I don’t worry anymore because I know God will open doors for us.”

> To learn more about the Genesis Academy, visit their website www.genesisacademyja.com