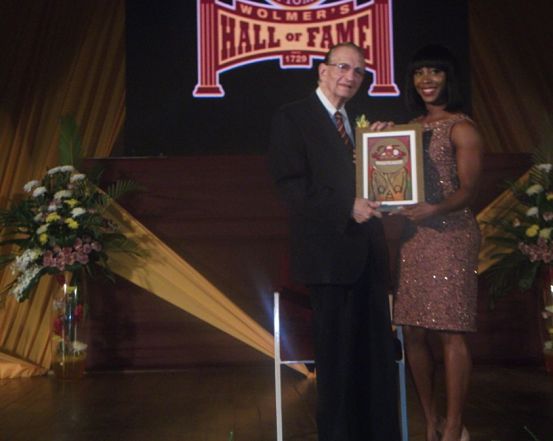 “I’m 85 and still alive.” You have to hand it to Edward Seaga – the original architect of the classic sound byte. The former Jamaican prime minister, looking dapper and in the pink of health, was on Friday responding on behalf of all the honorees who were inducted into the Wolmer’s Hall of Fame – 14 distinguished alumni (including six former principals) and two living legends (Seaga and social work stalwart Sybil Eloise Francis) – at Wolmer’s Boys School, during a well-attended ceremony that coincided with the official unveiling of the stunning new Douglas Orane Auditorium.

It was only natural that Mr. Seaga would pay homage to the institution that helped mould him into the esteemed history-maker we have come to know and respect. “This is a secondary school that has renewed itself. It has added without subtracting and that’s wonderful,” Seaga said in praise of his alma mater. “It’s encouraging to see what has happened to Wolmer’s. What can we say about a school that has two arms to work with and is using both? We say let others do the same. Let them realize that where we are is a fraction of where we should be and will be tomorrow.”

Seaga, whose family (wife Carla and son Christopher) were on hand to witness him receiving this latest honour, announced that he would be donating eight pieces of musical equipment to the school – perfect for the auditorium. “I remember in my days we had some of the best instructors inspiring us and paving the way, and I would like that to continue. My Wolmer’s life was an unforgettable experience.”

Long considered an iconic political figure of post-colonial Jamaica, Edward Seaga, whose most famous lines include “Retiring is too tiring”, has spent much of his post-politics life picking up awards and being conferred with honorary degrees locally, regionally and internationally. In 2002, the former JLP leader and West Kingston MP received the Order of the Nation from the people of Jamaica and in 2005 was named a Distinguished Fellow of the University of the West Indies.

On Friday, he led an accomplished cast of Wolmer’s alumni, living and deceased, who made up the first batch of inductees ushered into the venerable institution’s Hall of Fame. Amy Jacques Garvey, Sir Herbert McDonald, Miriam Speid, Sir John Stanley Mordecai, Ebenezer Reid and Sir Florizel Glasspole topped the list.