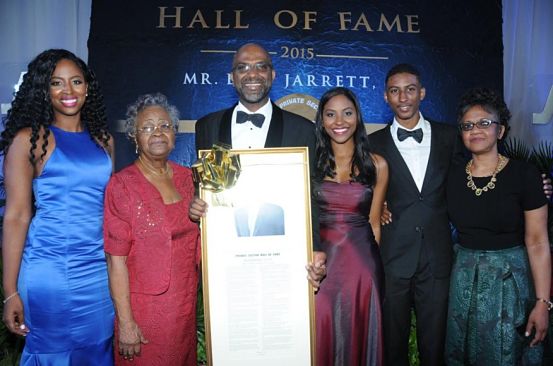 PROUD MOMENTS: Celebrating with members of his family at the PSOJ Hall of Fame ceremony on Wednesday; (below) with the World's Fastest Man at the recent Heroes in Action 5K Run/Walk in Falmouth.

A couple of special moments made this a standout week for Earl Jarrett. First, he was inducted into the Private Sector Organization of Jamaica’s Hall of Fame on Wednesday night during a lavish ceremony at the Jamaica Pegasus Hotel. Second, he returned to the hotel’s Grand Jamaican Suite Thursday afternoon to rub shoulders and chit-chat with charismatic diva Sheryl Lee Ralph, who gave the keynote address (“an excellent idea”) at the Keeping Abreast luncheon put on by the Jamaica Cancer Society, which Jarett has been serving as Chairman for years.

It’s been some six decades since the JCS came into existence, and it goes without saying that leading the organization at this time matters deeply to Jarrett. “I’ve been involved with the organization for about 28 years now, and I’ve committed my life to the JCS,” he tells TALLAWAH. For him, it’s also personal. “My grandmother died from cancer,” he reveals, “and at the time there was nothing we could do. So, now more than ever, we remain committed to the fight. It’s about being sufficiently knowledgeable as we work to provide greater access to screening and treatments for patients.”

Earl Jarrett’s résumé is massive, revealing his involvement with a wide range of Jamaican organizations and social causes. As such, we’ve always wanted to ask the JNBS General Manager how he finds time to wear so many hats and serve in so many different capacities. He sums up his response with one solid word: support.

“I get great support from the JNBS team,” says the 55-year-old stalwart, whose lengthy list of ‘credits’ includes work with the Jamaican Diaspora Foundation, the National Council of Jamaica, Order of St. John, the Council of the UWI Mona Campus, and the list goes on and on. “I think it’s that inner drive that I have that allows me to do so much,” he reflects. “I find that I always feel the need to do more for my country.”

Unsurprisingly, the PSOJ honour is only the latest on a long list of awards and prizes that have been bestowed on this distinguished son of Jamrock. In addition to the Order of Distinction (Commander Class) conferred in 2008, Jarrett’s trophy case contains a 2010 Caribbean Luminary Award, a UWI Pelican Award and numerous other local and regional accolades. Of course, he feels there’s special prestige attached to the PSOJ honour. “Honestly, I was overwhelmed. I didn’t realize it would have felt so good,” he remembers, smiling. “But I’m thankful to the business community and members of the public sector for giving me such great support over the years.”

It will be interesting to see how the Earl Jarrett story unfolds from here, but for now he’s basking in a spirit of gratitude and considering the endless possibilities. Does he have any advice for his young admirers? “Become more engaged,” he urges. “Your hard work and commitment will help you make a difference in your country.”