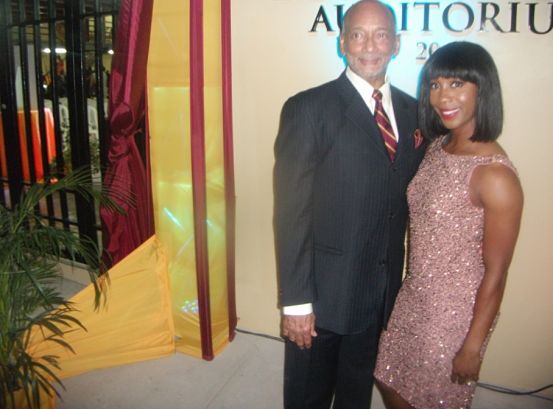 The final act on a long list of 285th anniversary activities, the official unveiling of the Douglas Orane Auditorium at Wolmer’s Boys School (tied in with the launch of the Wolmer’s Hall of Fame) brought much fanfare to the institution on Friday evening, drawing together a host of distinguished Wolmerians and outstanding Jamaicans to celebrate a landmark moment in the school’s storied history.

“Now the oldest school in Jamaica can say it has the newest auditorium,” quipped GraceKennedy CEO, Don Wehby, whose company was one of over 700 donors (public and private sector entities) who contributed to the construction of the mammoth building, via cash, kind or services. As TALLAWAH also learnt, the new auditorium was completed in just under 10 months to the tune of $170 million – almost thirty years after the school’s first auditorium was destroyed by fire.

“This is a reminder that dreams are powered by hard work and what can be achieved when people from all walks of life work towards a common goal,” Wehby noted. “John Wolmer would indeed be proud.”

For current Chairman of the Wolmer’s Trust, Milton Samuda, the new state-of-the-art facility is a manifestation of the dream of the 285th Anniversary Committee to construct an auditorium that would benefit all the Wolmer’s schools though it’s located on the boys’ campus. “Wolmer’s has a habit of turning buildings into much more – a crucible for the future and future leadership of Jamaica,” Samuda noted. “Many thought our plans were too ambitious but it has all been done and all done well.”

Meanwhile, Minister of Education, Rev. Ronald Thwaites, in his brief remarks lauded the Wolmer’s family for its continued “devotion to education” and for “setting the pace with a vision for progress that has always characterized the institution.” Co-chair of the 285th Anniversary Committee, Dr. Judith Robinson, called the new auditorium “a fitting monument” and “a dream come true for students new and old.”

But nearly everyone who graced the podium on Friday were quick to heap praise on one man in particular – Douglas Orane, the eminent past student and retired GraceKennedy chairman whose determination and inspiring leadership was the catalyst for the building coming into existence. Fittingly, it’s named in his honour. “This is just so overwhelming. I am so, so happy. The first morning I came in here and saw the joy on the boys’ faces confirmed that we had achieved something that would greatly impact their lives,” Orane said, while also thanking members of the alumni association. “It just amazes me how when we as Jamaicans get together what we can achieve.”

> FUN FACT: Did you know that the two most recent Chairmen of GraceKennedy Limited (Douglas Orane and Prof. Gordon Shirley) are Wolmer's Boys graduates?