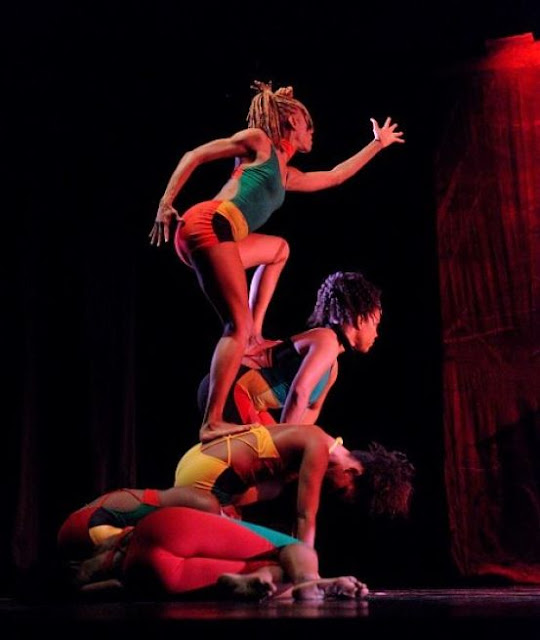 IN THE HEIGHTS: The NDTC's performance of Chris Walker's "Rough Drafts" was among the concert's many highlights.

It is a truth well acknowledged that graduates of the Edna Manley College have contributed significantly to the development of the local arts and entertainment industries. And continue to do so with noteworthy effect. After all, the college just keeps churning them out.

Some of the new-generation graduates, who’ve gone on to achieve breakout success in the fields of dance, music, comedy and drama (among other areas) were in their element Saturday night as they brought their awesome talents to the main stage at “Water the Roots,” a culture-based alumni fundraiser that pulled the curtains down on the 2015 Rex Nettleford Arts Conference in show-stopping fashion.

It was a highly entertaining showcase, pulsing with life and emotion, and the reminder that variety is indeed the spice of life.

Still celebrating the critical acclaim that met the release of their sophomore album, Destiny, the bandmates of Raging Fyah had the large crowd on its feet grooving to their roots-rock-reggae hits like “Running,” “Don’t Worry” and “Judgment Day” – their compelling musicianship, coupled with tight harmonies and lead singer Kumar Bent’s appealing vocals, showing us why they’re the hottest reggae band in Jamaica right now. No pun intended.

Brimming with self-confidence and displaying admirable vocal skills and stagecraft, on-the-rise crooner Jermaine Blake delivered another of the night’s most memorable acts. His assured delivery buoyed up an inspired mix of covers (Dennis Brown and John Holt classics) and well-written originals (“Please Sir”, “The Sun Must Come”) that went over well with the crowd, including a few screaming young females who are no doubt fans of the singer-songwriter’s clean-cut image and a stage presence that combines the styles of Tarrus Riley and Kevin Downswell. Definitely one to watch.

The NDTC (whose senior members practically run the School of Dance faculty) brought their signature mix of kinetic energy, bold-faced imagery and riveting choreography to a performance of Chris Walker’s “Rough Drafts,” a modern classic full of attitude and rebel spirit.

Other crowd-pleasers were the fresh-from-foreign band Notis (The Heavyweight Rockers), who scored cameos from Jesse Royal and Iba Mahr; comedy queenpin Kathy Grant, who brought her unique blend of hilarity and no-nonsense advice to the stage; and dancing machine Kimiko Miller, who made fun, light work of Busy Signal’s “Watch Me Now.”

Sodanne Brown’s Beam Dance Company got their shining time, too, as did the Fusion band, which accompanied actor/comedian/vocalist Donald ‘Iceman’ Anderson (also one of the night’s emcees) as he delivered a suite of catchy original tunes and old-school reggae-dancehall cuts. And that’s another thing about Edna graduates: they tend to redefine what it means to be multi-talented.