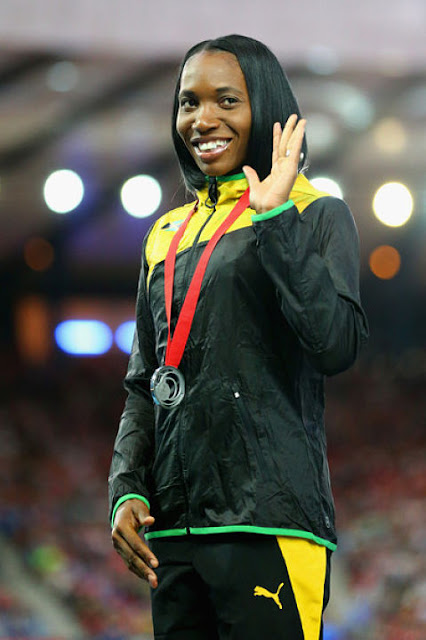 ALL-JAMAICAN GIRL: "One thing I know for sure is that champions and winners are not created overnight," says the 33-year-old Olympian.

“She’s a fighter and a warrior who has been through a lot. And the lesson we can all learn from her is to never give up. We can see the great qualities she possesses, and she’s a worthy winner tonight.”

This coming from Veronica Campbell-Brown (in a TALLAWAH interview) paying glowing tribute to compatriot and good friend Novlene Williams-Mills, who won the 2015 Courtney Walsh Award for Excellence during a low-key ceremony at the Jamaica Pegasus Hotel in New Kingston on Thursday night – becoming the fifth sportswoman to walk away with the highly coveted award.

This year’s three other finalists – Reggae Boyz skipper Rodolph Austin, chess maverick Warren Elliott and Sunshine Girls star Sasher-Gaye Henry – are exceptional athletes in their own right, but from the get-go it was clear that Williams-Mills was a shoo-in for the award. CHASE Fund Chairman, Dr. Carlton Davis, agrees, calling Novlene’s story “a profile in courage on an off the field” and a powerful example of “grace under pressure.”

A four-time national 400M champion and multiple Diamond League winner, who has been very open about her triumph over breast cancer and other personal struggles, Williams-Mills proved instrumental in securing the 4X400 metres gold medal for Jamaica at this summer’s IAAF World Athletics Championships in Beijing, China. “She put in a lot of work. By nature, she’s a woman who works hard no matter what’s going on around her, and my job is to always be there to support her and to hold her up,” shares Jameel Mills, Novlene’s through thick-and-thin spouse who, along with members of her extended family (travelling all the way from Gravel Hill, St. Ann) were in attendance to show their support.

Sure enough, when I ask Novlene what keeps her going these days, she hastens to heap praise on her Garden Parish supporters. “I don’t know where I would be without my family. They have been with me every step of the way,” reflects the 33-year-old athlete, who calls Jameel her “rock and support system for so many years.” “They know what I’ve been through, and I can always count on them to be there for me no matter what.”

The Courtney Walsh Award, she says, is not only a validation of hard work garnering success but a reminder that giving up on a dream is never the way to go. “At times I felt like quitting, but I reminded myself that it’s not how many times I fall down but how many times I get up that matters,” says Williams-Mills, who co-captained Team Jamaica at the 2012 London Olympics, winning a bronze in the 4X400M relay.

She adds, “One thing I know for sure is that champions and winners are not created overnight. It takes a lot of hard work and dedication. I am honoured to receive this award, and I’ll cherish it for the rest of my life. I am so grateful that I can be and inspiration and an example for so many people.”