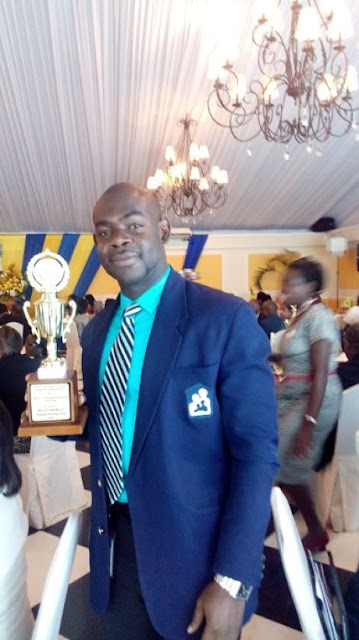 BORN TO WIN: Campbell shows off his trophy at last week's awards ceremony at the Terra Nova in St. Andrew.

The judges say he represents the best individual example of customer service excellence; his colleagues praise his brilliance and knack for going above and beyond the call of duty. But for Ryan Campbell, serving members of the public each working day with class and utter professionalism amounts to simply doing what comes naturally to him.

“Customer service is my life, so it’s an honour to know that they acknowledge my work and have decided to show their appreciation by giving back to me in this way,” says Campbell, who won Best Customer Service Officer at the recent Public Sector Customer Service Awards, which honours excellence in customer service across the island, via public voting and a round of adjudication, spearheaded by chief judge Dr. Carol Royce.

“It’s a pleasure to serve. It’s a passion of mine,” adds Campbell, 31, a charismatic staffer at the St. Catherine branch of the National Housing Trust (NHT).

Born and raised in a section of Spanish Town, close to Tawes Pen, Campbell grew up idolizing his gregarious, hard-working parents Calvin and Rhona Campbell, who sent him to the Spanish Town Primary School before he landed a place at St. Jago High. Coming of age in that neck of the woods, he says, kept him humble and grounded.

“I was always focused on my school work,” he remembers, “because my parents always stressed that it’s my education that would make me into somebody who can make a meaningful contribution to society.” Graduating from St. Jago in 2002 led to enrolment at UWI Mona for three-year studies in Management and Accounting.

Working with the NHT (for almost 10 years now) became his first serious job fresh out of college. They liked him right away. “[Ryan] goes above and beyond when it comes to doing his job and satisfying the customers,” says the NHT’s Customer Care Manager, Donnetta Russell. “He will do whatever it takes to get the job done. He’s a genuinely affable person so people are drawn to him, and he takes service personally.”

When asked to share his own thoughts on how to establish that mutual-benefit rapport between employee and customer, Campbell doesn’t have to even think about his answer. “My philosophy is, ’My customers are me. We want the same thing – to be treated with respect and dignity.’ So I try to put myself in their shoes and approach the problem from that angle,” explains the sturdily built family man, who still lives in Spanish Town, with wife Antoinette (his high-school sweetheart whom he wed in December 2012) and their five-year-old son Antoine.

He adds, “Good customer service is not a job; it’s supposed to be a memorable experience, and that’s what I always strive to give.”

But, by his own admission, sometimes things don’t go so smoothly. And that’s fine by him. He likes a good challenge. Some of his fondest on-the-job encounters involve “transforming” a potentially disastrous situation into a positive turn-of-events for everyone involved.

“I can remember a lot of cases where a client comes in very upset for whatever reason and leaves feeling much better. People come in all the time with real problems to be solved, and my job is to assure them that they are getting the kind of attention and quality service that will provide a solution. I put myself in their shoes,” he says. “I make sure that they leave feeling that they’ve just met someone who cares.”

> WINNERS' CIRCLE: Who won what at the 2015 Public Sector Customer Service Awards