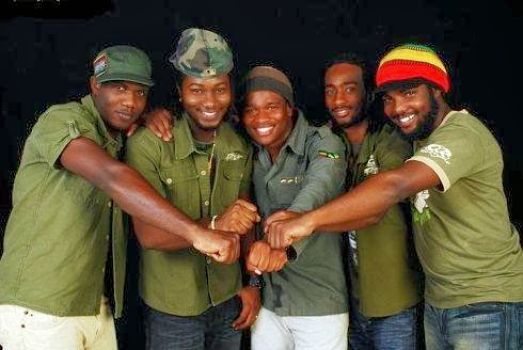 BAND OF BROTHERS: "Music is what we love doing; so we just keep it real."

“We are no longer just a band; we are building a family,” says Raging Fyah frontman Kumar Bent, talking to TALLAWAH about the dynamics keeping the five-member unit together after almost a decade. According to the bandmates, who decided to form a group while pursuing their passion for music at the Edna Manley College, they are brothers for life. “We came together as a unit because of our live for the music; not just to make money,” says drummer Anthony Watson. “And until we die, music will be our life. This is what we love doing, so we just keep it real.”

Fresh from an exhilarating performance in Haiti, the roots-reggae rockers, whose sophomore album, Destiny, was among the best reggae releases of the past year, are no focused on raising the bar with their next full-length effort. It is due out by the summer of 2016.

“It will be a bit edgier, different from what people are used to hearing from us, but the roots-reggae and reality is our foundation so that won’t change,” Watson points out, adding that they’ve also recruited in-demand hitmaker Lamar ‘Riff Raff’ Brown to help them craft some memorable tracks for the project. “He worked on Stephen Marley’s last album, Revelations, so we’re hoping for some of that classic stuff for our album.”

In the meantime, the band put in a sharp 20-minute performance to close the show at Water the Roots at their alma mater on Saturday. “This is home for us, so anytime we come back here is always special,” Watson says.

Lucky for them, Raging Fyah will be ending their year on a high note, when they headline the Wickie Wackie Music Festival in Bull Bay, scheduled for December 5 and 6. “It’s still in the planning stages, but this is the sixth staging, and it will be the best one yet,” Bent predicts. As for the rest of the lineup, it doesn’t get any better than Kabaka Pyramid, Jesse Royal and Morgan Heritage.