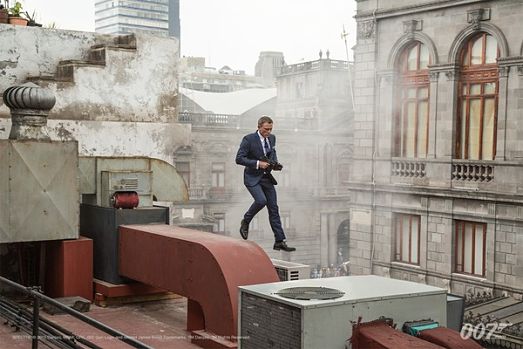 CUT TO THE CHASE: As ever, Mr. Bond is a man on the move.

Spectre marks Daniel Craig’s fourth outing as the smooth and debonair Agent 007, James Bond, and it’s also rumoured to be his final appearance, as anticipation rises for the emergence of (at last!) a Black Bond, who may or may not be portrayed by British sensation Idris Elba. It’s also the 24th Bond film (produced by Eon Productions) and quite possible the darkest entry in the franchise’s storied history. At its best, Spectre is a rip-roaring, highly enjoyable, action adventure saga that hops across geographical zones, as Bond performs all manner of heroic derring-do, battling bad guys and having his way with beautiful women.

The action opens in modern-day Mexico City (the Day of the Dead celebrations are in full swing), where Bond is on a rogue mission following up on a cryptic message. The spotlight then shifts to Rome, where the agent encounters the beautiful and forbidden Lucia (the ageless Monica Bellucci), wife of a notorious criminal. But what’s most interesting is the discovery of Sceptre, a sinister organization that casts a long shadow.

Over in London, meanwhile, problems arise when Bond’s enterprising actions are challenged by Max Denbigh (Andrew Scott), who is up in arms about the relevance of the MI6 programme led by M (the always welcome Ralph Fiennes). Grappling with stern opposition left, right and centre, Bond needs all the help he can muster and geos in search of Madeline Swann (the gorgeous and talented Lea Seydoux, daughter of his old nemesis Mr. White (Jesper Christensen), who may hold the key to untangling Spectre’s web. What’s more, the deeper Bond goes to find answers the more he learns of chilling connections between himself and this powerful new enemy.

Sam Mendes may be a deft master at crafting splendidly evocative, dialogue-heavy dramas like American Beauty and Revolutionary Road, but here the Oscar-winning filmmaker proves himself just as competent in the realm of fast-paced kinetic action, twists and turns and heart-pounding suspense with a dark edge. Overall, it’s riveting cinema, with Craig in splendid physical form (as always) and Waltz (Inglourious Basterds) keeping him on his toes thanks to a performance laced with emotional precision and intermittent comic relief.

In short, Spectre comes at audiences with classic Bond stuff: zippy, high-wire action, dramatic tension, spectacular visuals and the kind of incredible stunt work you simply have to see for yourself.