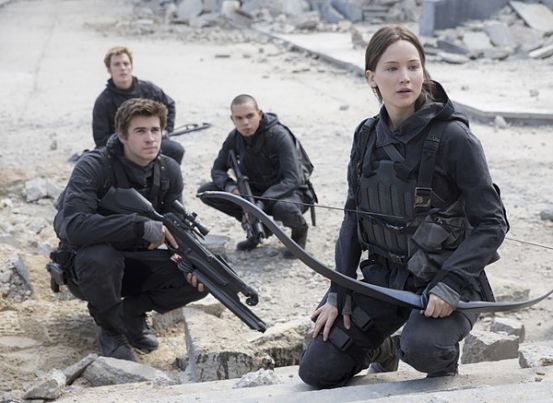 ON A MISSION: Katniss (foreground) and her fellow soldiers prepare for war.

If one were to sum up the latest instalment of the blockbuster franchise The Hunger Games - Mockingjay Part 2 - in five words or less, it would probably read something like “Katniss Everdeen has had enough!” Indeed, the action-packed, Francis Lawrence-directed flick is a thrilling testament to the girl on fire’s defiance against a brutal regime that has held her people captive for far too long. Enthralled by her will-stop-at-nothing determination, resilience and fearless leadership in the face of insurmountable odds as she faces the fight of her life, you can’t help but root for her.

At the same time, what makes this epic conclusion to the series (created by bestselling author Suzanne Collins) all the more enjoyable and compelling is the pull-out-all-the-stops approach that the game-makers have employed this time around to cut down Katniss and co. What plays out is an occasionally moving, frequently heart-pounding battle to the finish.

Even so, our nimble heroine and her fellow soldiers have their eyes squarely fixed on their prize: storming the Capitol to bring an end to the reign of terror of the ruthless President Snow (Donald Sutherland, all steely stupor) and restoring a sense of dignified humanity to what’s left of the districts. “If we die,” one woman says, empowering her colleagues, “let it be for a cause and not a spectacle.”

All in all, it’s bombastic stuff that lives up to expectations. As ever, Jennifer Lawrence is a riveting presence on-screen and she is solidly supported by the cast of usual suspects, led by Liam Hemsworth (Gale) and Josh Hutcherson as Peeta, whose mental well-being is cause for alarm and could put Katniss and the entire mission in jeopardy. Acting heavyweights Julianne Moore, Philip Seymour Hoffman, Elizabeth Banks, Woody Harrelson and Stanley Tucci all reprise the roles that seem to fit them so well, while a few faces from last time step up in a big way.

But Katniss, our noble ‘mockingjay’ and a strong and inspiring young woman, is the firm anchor around whom the story and indeed the whole saga revolves – a brave soul whose tireless crusade can teach us all a thing or two about taking a stand against grave oppression and injustice.

Email ThisBlogThis!Share to TwitterShare to FacebookShare to Pinterest
Labels: At The Movies, Current Cinema, Flick of the Week, Jennifer Lawrence, Movie Reviews