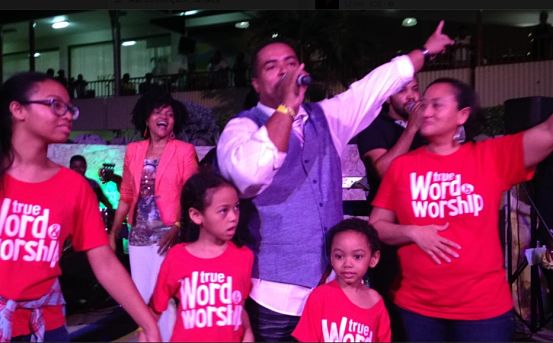 FAMILY MAN: The veteran artiste, celebrating the release of his new album with members of his family and Carlene Davis (background) in Kingston on Saturday.

Among Junior Tucker’s big plans to usher in the latest chapter of his life (he’ll soon be 50) was the establishment of a church ministry to fortify his work in Jamaican gospel. He’s kept his promise. This past weekend saw the official launch of the True Word & Worship Ministry, which has made the New Kingston Shopping Centre its home (the Doctor Bird in in particular), where Sunday-morning services be held at 10am, with Tucker as the Good Shepherd leading the flock in very much the same way that fellow gospel ambassador Ryan Mark has amassed a loyal following of his own, with Haining Road’s Theatre Place as their base.

According to Tucker, while praise and worship and Bible study will figure prominently in his church, he wants to create a free-spirited atmosphere, which extends to even the dress code. “Personally, I am a jeans and sneakers man, so I don’t mind if the congregation wants to be casual as well. I want them to be comfortable and feel like they can just be themselves,” he tells TALLAWAH.

To wit, the motto of the church, which he runs with his wife and other members of his family, goes, “No perfect people allowed.” What is that about? “It simply means come as you are, with all your flaws and shortcomings. Nobody is perfect, so you don’t have to act like you don’t have any problems. We are not here to judge you. We are here to help you and to contribute to your growth while we also grow as a church community,” explains Tucker, who just released an album called Jesus Famous.

The album’s electrifying launch, a marathon praise party on Saturday night in the round of the shopping centre, brought out a dynamic who’s who of Jamaican gospel royalty – but more specifically veterans like Papa San and Carlene Davis who, like Tucker, left the secular music world years ago to sing tunes of spiritual upliftment and share life-changing testimonies. “[Junior Tucker] is a mighty man of God who’s been called to do great things for the kingdom, and now that he’s ministering we can expect great things from him,” Papa San tells TALLAWAH at the launch, moments after exiting the stage. “He’s had an excellent career. He’s been singing from he was a child. He was in the secular world and now that he’s been born again. I think his best is yet to come.”

Jesus Famous is 12 tracks of spirit-lifting island worship, featuring rousing tunes like “I Want It All” and the pulsating title track. “This is part of the brand that I am building,” Tucker says of the CD. “I want to make Jesus famous through my music and ministry. It’s never about me.”

It goes without saying that family and fatherhood matter deeply to the 49-year-old icon. In fact, he considers having a healthy and stable family life his greatest achievement. “Next year will be 25 years since I’ve been married and now I am a father of five,” he reports, beaming. What has being a father taught him? “Being a father has taught me a lot about serving God. I didn’t have a good relationship with my father, so with my children I want to be like a mirror image of God and emulate him to be the best father I can be. I feel blessed to be able to say that I know who I am and I know my purpose. My destiny is defined.”