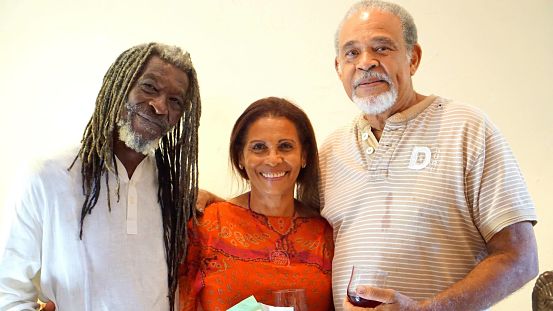 ART & LIFE: Pearson, McDonald and Constantine sharing a moment. Below, selections from the show.

An exquisite study in texture and contrast, form and function, the Earth & Fire exhibition, a collaborative effort between art-world stalwarts and longtime colleagues Gene Pearson and Tony Constantine yields a collector’s a dream showcase. At the same time, the exhibition offers glowing testament to the evolving skills and workmanship of two artists at the height of their creative powers.

The display is being housed at Art Décor VIII, a tony and cozy upstairs loft-turned-creative-space, located at 8 Hillcrest Avenue (off Hope Road), which happens to be a former residence of the late musicologist and founder of the Jamaican Folk Singers, Dr. Olive Lewin. In a nutshell, Earth & Fire is splendid artistry on view.

Pearson’s signature eye-catching masks and ceramic heads can be found in collections everywhere, and the pieces he’s presented this time around are just as magnetic and full of mystery. Whether glazed or unglazed, they are a joy to behold. Tony’s creations (small monuments moulded from clay), meanwhile, have their own inherent appeal and speak eloquently to his roots in the field of architecture. Together, Gene’s and Tony’s works beautifully complement each other, demonstrating how contrasting aesthetics can reflect creative imaginations that are at once individualistic and boldly visionary.

Connoisseur Hyacinth McDonald is the curator of the exhibition and the proprietor of Art Décor VIII. Though she’d love to take credit for bringing these two megatalents together, she confesses it was all Gene’s idea. “First of all, when I called Gene in December with the idea of doing this exhibition, we spoke about it but nothing was finalized until January,” McDonald recalls. “Then when we spoke again, he said he’d do it but he wanted to include his friend Tony. I wasn’t familiar with Tony, who I later learnt was his protégé, but when I saw his work I thought it was just awesome.” 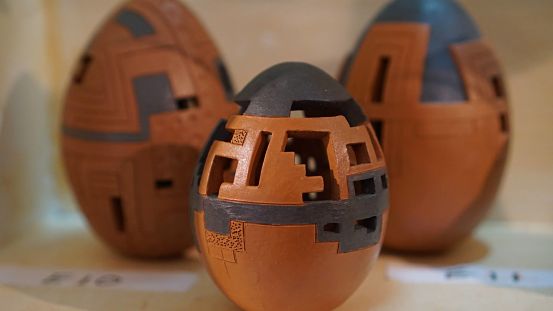 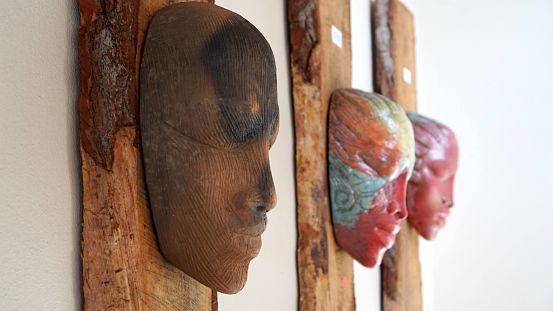 McDonald is not the only one who feels that way. A number of viewers of the exhibition clearly do too, as several of Constantine’s pieces have been labelled sold since the show opened last Sunday. It goes without saying that Gene’s masks are also a hit.

In the meantime, Art Décor VIII has been serving the local art community since 2011, when Hyacinth and husband of 36 years, Douglas (both avid collectors), decided to parlay their passion for collecting artwork into a bonafide little family business. “It’s been a good move for us, but what we’ve found is that art is seasonal, so there are months that we sell nothing and there are months that are very profitable. But that’s how it is in this business,” Hyacinth tells TALLAWAH. “I am just a real art enthusiast, and opening this space and becoming an art dealer is like having a hobby that got out of control.”

Prior to the Earth & Fire exhibition, Art Décor VIII hosted a showcase of Philip Supersad’s finest works, and when Earth & Fire closes to the public, a wide-ranging display (featuring miscellaneous pieces from private collections) will be mounted. “What I like most about hosting exhibitions here,” McDonald says, “is that we’re playing our part in keeping the arts and culture alive in Jamaica.”