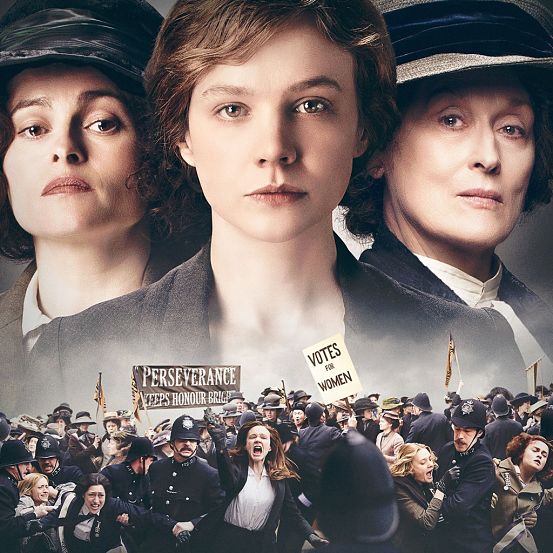 REBELS WITH A CAUSE: Bonham-Carter, Mulligan and Streep play pivotal roles in the period piece.

They called them foot soldiers. That’s the fitting description used to refer to the militant women – the ‘suffragettes’ – who gave life to the early feminist movement in turn-of-the-century London – working-class women who, perched on the frontlines of a revolution, were willing to put their lives at risk when it came to advancing the cause of women earning the right to vote and ultimately gaining some semblance of equality with their male counterparts. Their story gets a powerful cinematic telling in this season’s Suffragette, a terrific little film that packs a wallop as it vividly showcases the oppression these women endured and the lengths they were prepared to go in their fight fir ‘justice.’

Screenwriter Abi Morgan’s reputation precedes here, and here she expertly combines ripped-from-the-historical-headlines accounts with gripping narrative in crafting a story that’s alternately riveting, inspiring, infuriating (to some) and deeply moving. As such, director Sarah Gavron had first-rate material to work with in fashioning this rousing period film, which is anchored by strong ensemble acting all around.

Leading the pack, in an award-worthy performance, is Carey Mulligan as Maud Watts, a young mother and laundry worker who loses everything – her job, marriage and the young son she adores (to adoption) – at the height of the struggle. To say she is laid bare would be an understatement. But Maud, a tough cookie at heart, finds the courage to press on (even while sleeping nightly inside a cathedral) and draws on the support of an incredible group of strong and committed women, her fellow sisters fighting the good fight.

We are introduced to medical practitioner Edith Ellyn (Helena Bonham Carter), a warrior for the cause; Maud’s co-worker Viola Miller (Ann-Marie Duff), an abused wife who first showed her the ropes; and the suffragettes’ imperial leader Sylvia Pankhurst, played by Meryl Streep, who has only one-and-a-half scenes lasting a total of about five minutes.

As portrayed by Streep, that’s all the time Pankhurst really needs to drive home her message loud and clear. “It is deeds not words that will get us the vote. We don’t want to be law-breakers; we want to be law-makers. But we have been left no choice but to defy this government,” she tells her loyal followers during a late-night rally convened in secret. “I would rather be a rebel than a slave. Never give up the fight. Never surrender.”

When their quiet and respectful protests fail to gain traction, the agitators turn to rowdy street marches, even smashing shop windows and in one scene fire-bombing the home of a senior government official. In short, they give the police, led by overburdened chief investigator Inspector Steed (Brendan Gleeson) a warm time, keeping them busy. Given their mission, prison time is no deterrent to these women.

All in all, the film (basting sumptuous costuming, a sublime original score, and splendid details from the period) captures the heady ‘excitement’ of the movement, not to mention the clashes and other catastrophic events that marked this turbulent period in women’s history.