AT THE MOVIES: Creed scores with a winning mix of action and strong performances 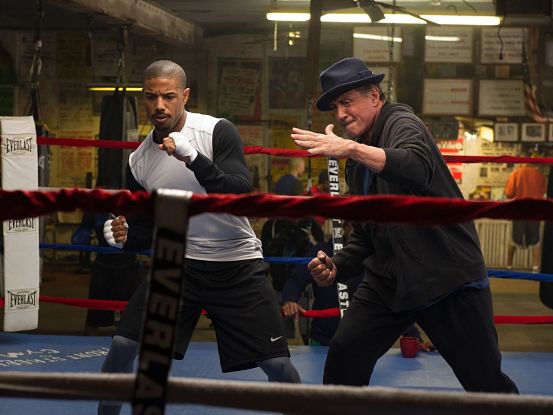 RING MASTERS: Stallone and Jordan's compelling chemistry is one of the film's assets.

Sports-themed movies tend to invigorate, inspire and reaffirm certain truths about life and human relationships. And that’s precisely what makes Creed so appealing. Strongly acted, well written and stirringly told, the rousing movie (a Rocky spin-off about the bruising sport of boxing and youthful ambition) delivers a story that not only resonates with audiences of all walks but strikes a triumphant chord that will move anyone who’s ever dared to chase their dream in spite of the odds. In a nutshell, it’s easily one of the best films we’ve seen all year.

Michael B. Jordan (Fruitvale Station), Black Hollywood’s young leading man of the moment, stars as Adonis “Donnie” Johnson, a decent guy who trades the L.A. scene for Philadelphia to pursue his dream of becoming a professional boxer, while determined to escape the towering legacy of his late father, a world-famous prize fighter named Apollo Creed, who abandoned him as a child. Subsequently, he was adopted.

Now all grown up and enthusiastic about making a name for himself in the sport and building his own legacy, Donnie seeks out the legendary Rocky Balboa (Sylvester Stallone), who knew his father, to train him and help transform him into a champion. Though reluctant at the outset, Rocky (still a force to be reckoned with despite the age factor and ill health) takes Donnie under his wing, imparting some tough lessons. The father-son bond that they come to share, not to mention the compelling chemistry between Stallone and Jordan, ranks high among the film’s many highlights.

With sure-handed direction, Ryan Coogler (who directed Jordan to critical acclaim in Fruitvale Station and co-wrote this screenplay with Aaron Covington) shows admirable versatility behind the camera and pulls fine work from his cast. Fit as a fiddle and extremely committed to the character, this is the role Jordan has been waiting for. Ideally cast, he brings impressive inner strength and sublime masculinity to the screen. His conviction and self-assured delivery augers well for his future. Stallone, meanwhile, delivers that signature mix of old-school machismo and restraint we’ve come to associate with the Italian Stallion.

Rounding out the terrific supporting cast are Phylicia Rashad (The Cosby Show, A Raisin In The Sun) as Donnie’s good-natured foster mom Marianne; Anthony Bellew as heavyweight champ Pretty Ricky Conlan, who gives Donnie the toughest challenge of his burgeoning career; and Tessa Thompson (For Colored Girls) as soulful singer and free spirit Bianca, his apartment neighbour who becomes his love interest and the motivation to rise to the occasion.

With a running time of close to two and a half hours, Creed moves at a zippy pace, very much like the action inside the ring. But, thankfully, the film’s rougher edges don’t get in the way of its refined exploration of powerful themes ranging from identity and family to legacy and destiny. Overall, it’s ovation-worthy stuff, hugely enjoyable and, like I said, one of the best films released this year.