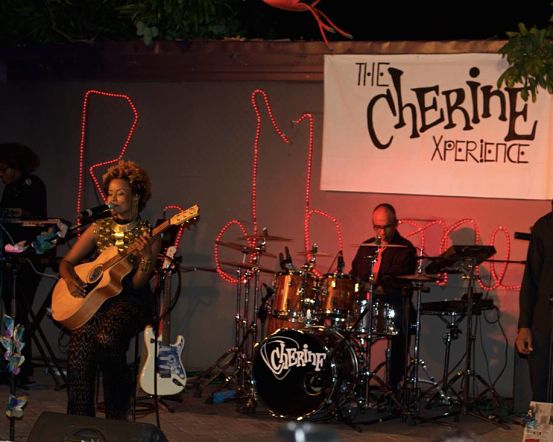 IN THE MOOD: The singer strums her trusty guitar during her well-supported Redbones concert.

When it comes to a headline performance by the songstress who goes by Cherine, we never forget to expect the unexpected. So when the dancehall-soul queen appeared centrestage at the Redbones Blues Café last Friday night, clad in a supersexy black lace ensemble, to kick off our holiday-season entertainment roster with The Cherine Experience, we knew we were in for the royal treatment.

The jam-packed Redbones courtyard was not to be disappointed. Whether she was remixing Drake’s latest smash “Hotline Bling” or getting up close and nosy with a pair of lovers plucked from the front row, the petite chanteuse had her audience transfixed and regularly echoing her command “Say gwaan Cherine.”

The show’s many highlights confirmed that when it comes to stagecraft and putting on a stellar live performance, Cherine is a total class act. She had us grooving to sultry tunes like her breakout hit “Good Love” and “Comin’ Over Tonite” but wasted little time bringing the heat with brassy cuts like “Rebel” and “Weh Di Money Deh?” during the young, hot and independent segment.

In many respects, The Cherine Experience afforded her loyalists in the crowd a nice little career retrospective, spotlighting her expanding and diverse repertoire that, of course, includes the fan favourites “Talk If Yuh Talking” and “You and Me against the World.” 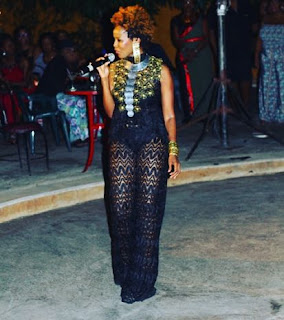 Empowerment, a timeless theme that the singer consistently champions in her work, dominated the second half, as she rapped with the audience, urging the youngsters in particular to hold fast to their passions in the pursuit of happiness and their dreams. Keeping it real, she even addressed her chameleonic image, which some have criticized as “too racy” in recent years. In her defence, Cherine makes it clear that she’s vowed to stay true to the real Cherine as opposed to being a version of something she’s not.

It was the ideal moment to segue into some spirit-lifting gospel (via Whitney Houston’s “I Love the Lord” and Kevin Downswell’s “Stronger”) and the classic motivational wisdom of “Try” and “Shine on Jamaica.”

If nothing else, The Cherine Experience (featuring opening acts Chase, Nina Karle and Peter Gee) proves that the singer knows how to deliver a first-class production worth your time and dollars. And, when all is said and done, her remarkable evolution as woman and artist continues.