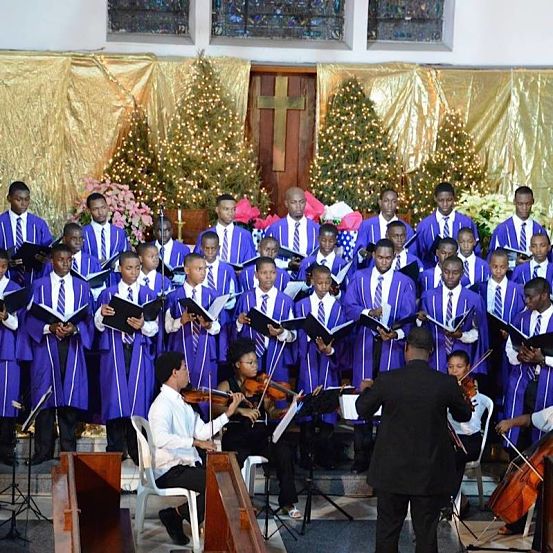 The Kingston College community is observing too major milestones this year: the 90th anniversary of the North Street-based all-boys institution and the 68th anniversary of their internationally acclaimed chapel choir, which puts on an annual concert season at this time of year. A shining symbol of tradition and continuity, the 50-voice group, under the baton of choirmaster Audley Davidson, was tasked with putting on a celebratory recital befitting such a momentous occasion. A tall order but mission accomplished.

What greeted patrons who packed the University Chapel at the Mona Campus on Sunday, full from Sunday dinner, was musical dessert that called for hefty servings. Equal parts exhilarating and reflective of the significance of the Yuletide season, the two-hour concert reaffirmed the choir’s place among the most outstanding choral groups in the island and the wider Caribbean.

Famed Italian composer Antonio Vivaldi’s master opus Gloria, the main event, provided a firm challenge for the young choristers, who responded with appropriate relish to the work’s complexities – unearthing sparkling notes from the plethora of moods and textures. With guest soloist Jodi HoLung (a sprightly soprano) as collaborator and mercurial musician Livingston Burnett accompanying them on keys, they achieved laudable results with their interpretations of the work’s “Laudamus Te”, “Et in Terra Pax” and the powerful “Gloria in Excelsis”, before climaxing with the fanfare-worthy “Cum Sancto Spiritu”, an exuberant showcase for the tenors and trebles in particular, voices in pitch-perfect harmony.

There was also much to applaud in the second half, which delivered traditional carols and several Christmas-themed tunes full of Caribbean flavour. Among the highlights: a brassy take on “Carol of the Bells”; a robust “Hark the Herald Angels Sing” (with the audience singing along); and the joyful Spanish carol “Esta Noche”, featuring crisp coloratura vocals from HoLung.

Overall, some pieces in the repertoire fared better than others, a clear winner being “Oh Holy Night” (given a very masculine polish with altos, tenors and basses only). But, best of all, were Davidson’s arrangement of Ernie Smith’s “All for Jesus” and the delightful show-closing rendition of “Jesus, Oh What A Wonderful Child,” commendably led by talented teen soloist Warren Coy and the very effective Kingston College Band, which we are hoping is planning a concert of their own for the New Year.

> Those who missed the choir’s Mona performance can catch the next show, scheduled for Sunday, January 3 at the St. Andrew Parish Church, Half-Way-Tree.