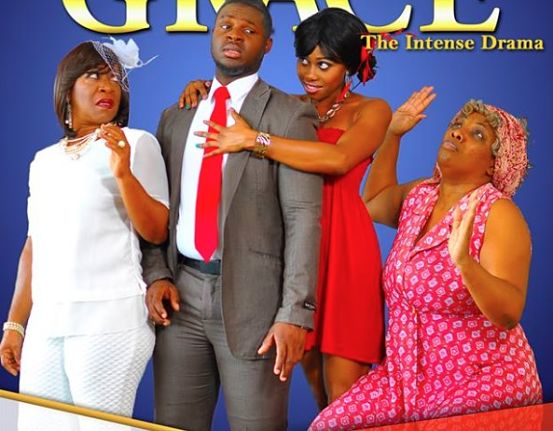 ALL IN THE FAMILY: Castmates appearing in a promotional ad for the play, which has a limited run this month.

What’s a long-suffering wife to do after discovering her husband’s scandalous indiscretions? She lays down the law, of course. That’s the basic premise of Saving Grace, the latest theatrical offering from talented scribe Fabian Barracks (pulling triple duty as writer, director and producer).

For the most part, the production, which opened at Ashe’s Vibes Theatre last Friday night, is solidly written and strongly acted by a stellar cast led by stage veteran Rosie Murray and on-the-rise leading man Nicholas Amore. Alongside rising star Renae Williams and relative newcomer Dawnette Hinds-Furzer, the foursome brings the fireworks as they heat up the stage with their secrets, lies and alibis.

The melodrama is thankfully kept to a minimum, but the dialogue occasionally falls flat in this intense exploration of how the foundation of marriage is easily threatened and the sacrifices it often takes to save a marriage on the rocks – and forgive.

We are introduced to police superintendent Jeffrey Johnson (Amore) and preening housewife Vivian Johnson (Murray), an aging upper St. Andrew couple who are constantly at loggerheads. As it turns out, after 12 years the cracks in their union have begun to show. “It’s like I don’t even know him anymore,” Viv complains one evening after yet another squabble. But she is about to get the shock of her life upon learning that Jeff is so bored in the relationship that he’s embarked on an affair with one Grace Tyndale (Williams), a ghetto-fabulous prima donna living in a freshly furnished apartment.

Things heat up when Grace drops a bombshell on Jeff that she may be carrying his child. When he starts putting distance between them, Grace makes it clear, Fatal Attraction style, that she will not be ignored – setting the stage for an epic showdown between wife and woman on the side.

All the usual Barracks ingredients are here: humour, high drama and a whiff of scandal straight out of Jack’s Hill. The cast does a superb job, bringing the show to life with rousing action and assured delivery that keeps you intrigued. While Murray is convincing as the put-upon, if a tad self-absorbed Vivian, Amore (though inconsistent) plays Jeff by channeling a young Marlon Brando type, with a blend of machismo and charisma. Williams, meanwhile, has little difficulty disappearing into the role of the dancehall-loving mistress with a tendency to give people a piece of her mind. And that includes her protective, God-fearing mother Miss G (Hinds, strong but overbearing at times), who never met a Bible scripture she didn’t like to quote.

All in all, Saving Grace continues Barracks’ track record of spinning tales that commandingly delve into timely and touchy subjects that hit close to home for Jamaicans. The subtle yet stylish set design scores high marks as does the lighting design, which varies as the show’s temperature rises and falls.

Overall, theatregoers will find much to laugh about and ponder while taking in Saving Grace, an entertaining mix of hubris and human relationships.