FIRST LOOK: Athletes and animals hit the track in Pantomime’s Runeesha and the Birds 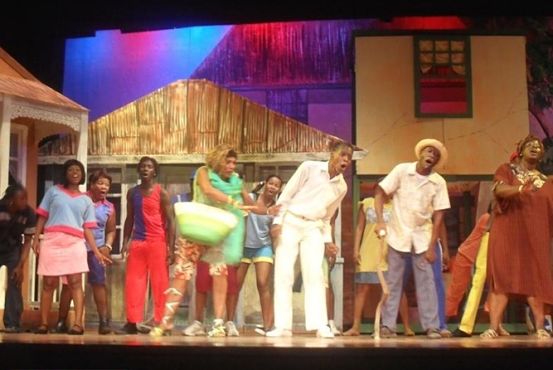 The animal kingdom tends to play a recurring role in the Little Theatre Movement’s pantomimes, whether it’s a story centred on the wiles and antics of Brer Anancy and his hapless victims, some merry chickens or a bunch of millennium bugs. This year’s show is no different. Runeesha and the Birds will open, in keeping with tradition, on Boxing Day (December 26) at the Little Theatre, and based on the preview that the media and members of the local arts community were treated to on Wednesday evening, it’s another exuberant musical comedy, full of rousing numbers, wholesome family entertainment and appearances by the birds and the bees and a host of their friends.

The skinny: the story follows young Jamaican athlete Runeesha (played by alternates Antonette Perkins and Latoya Newman), whose daily training finds her jogging though Bird’s Nest, an area where a colony of colourful birds live. A Big-Lympics aspirant, she’s in a league of her own – the pride of her family, neighbours and close friends, including a trio of lively birds (Doctor Bird, Bredda Bald Pate and Miss Parrot). Things are going swimmingly well until the cow birds roll into town, throwing everything into turmoil. To restore order, and with the Big-Lympics on the horizon, it becomes clear that humans and birds will have to put aside their differences and unite to reach the finish line victorious.

This year’s cast of characters (a batch of 10) is the smallest in recent memory but, according to director Robert ‘Bobby’ Clarke, that hasn’t made the task of putting together a tight and entertaining package any less challenging. “Several of the actors are playing dual roles and most of these roles ae animal roles, so it’s been a lot of work perfecting the characterization and physiology. That, for me, is the biggest challenge,” Clarke says. “Musically, we are trying to take [the pantomime] out of the folk genre and make it more appealing to a younger crowd. So this year you’ll hear more up-tempo numbers with reggae and dancehall flavor.”

As for the creative/technical team, the regulars reprise their roles: Clarke as director; Barbara Gloudon (script and lyrics), Patrick Earle (movement), Michael Lorde (set), Michael McDonald (lighting), Anya Gloudon-Nelson (costumes) and a live band led by Calvin ‘Bubbles’ Cameron. Runeesha and the Birds will run until May 2016 and marks the 75th anniversary of the annual song-and-dance production, Jamaica’s longest-running theatre tradition.