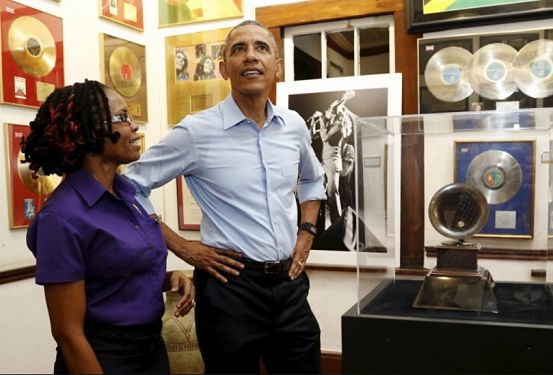 What a year! Jamaican pop culture had the best year ever – reflecting the changes and challenges, yes, but also a dynamic entertainment landscape that remains the pride of the Caribbean and fertile ground for stories ideal for Hollywood. Looking back on the past 12 months, the highlights are legion. Still, we put our game faces on and whittled them down to a top 17 (in no particular order) that we felt are memorable in more ways that one.

1. BRAND JAMAICA MOMENT: Barack Obama visits the Bob Marley Museum
When the Leader of the Free World paid us a visit earlier this year, it was only natural that the local chaperones organize a trip to the Hope Road landmark, where Obama was photographed taking in the treasure trove of iconography and memorabilia that form part of the tangible legacy of the late great reggae superstar. The photos went viral – and not just for posterity but in recognition of one history-maker saluting another.

2. SURPISE ACT OF THE YEAR: Omi
Omi’s original, Sly & Robbie-produced track “Cheerleader” struck a chord with young listeners who grooved to its catchy melody and straight-from-the-heart lyrics. But when German producer Felix Jaehn hopped on the remix, the song blew up, subsequently topping the Billboard Hot 100 and winning the reggae-pop star a whole new galaxy of fans, including Taylor Swift, and set the pace for his debut album, Me 4 U, released in October.

3. ENTERTAINER OF THE YEAR: Kevin Downswell
From the concert stage to radio playlists to the pulpit to bookstore shelves, Downswell’s creative influence was solidly felt throughout the past year, confirming his versatility and penchant for serving up musical fare that not only entertains but provides his audience with stirring food for thought. With another book and a new album in the works, we can’t wait to see what he delivers in 2016.

4. BEST THEATRE PRODUCTION: The Baby Scam
Patrick Brown’s storytelling skills were in top-flight when he penned this characteristically witty, dramatic and superfunny potboiler about liars and cheaters getting their comeuppance. As ever, the actors (especially Camille Davis and Glen Campbell) were dynamite, delivering some of the best work of their careers.

5. FAVE TV COMMERCIAL: Pepsi’s ‘Live for Now’
As crisp and sparkling as the refreshing beverage itself, this beautifully filmed clip (featuring a bunch of attractive young people enjoying the picturesque outdoors) had everything a great TV spot should: brevity, a quality product being showcased and a sense of adventure.

6. THE CONCERT EXPERIENCE: Reggae Sumfest
With showstopping performances by Jennifer Hudson, Common and T.I. and career-defining moments for Lady Saw and many others, the 21st renewal of Catherine Hall’s summertime jamfest was one for the record books – in terms of crowd size, yes, but mainly for the extraordinary calibre of the entertainment package.

7. OUTSTANDING BAND: Raging Fyah
Highly innovative and committed to taking roots-rockin’ reggae to all the continents, this five-member troupe delivered genre-defying sounds that celebrate cerebral artistry and craftsmanship, mixed with good old-fashioned melody-making. We consider them the Third World of their generation.

8. COMEBACK KID OF THE YEAR: Junior Tucker
A brand-new solo album (Jesus Famous) and his own church ministry, True Word & Worship (based in New Kingston) helped distinguish the entertainment vet from his peers in the gospel industry this year. Embodying the art of reinvention, while staying true to his family-man roots, Tucker continues to craft a legacy bolstered by staying power.

9. BREAKTHOUGH ARTISTE: Vershon
If there’s one thing to be said for this newbie (above), it’s that for an up-and-comer he punches way above his weight. As a result, within a year he racked up consecutive heatseekers-turned-radio hits (most memorably “Inna Real Life”), amassed a large following and is on everybodys’ list of the Best New Artistes of 2015 and the Ones to Watch in 2016.

Email ThisBlogThis!Share to TwitterShare to FacebookShare to Pinterest
Labels: Best of 2015, Culture Mix, Culture Spotlight, Flashback 2015, People In The News