FLICK OF THE WEEK: Vivid storytelling anchors suspenseful epic ‘Heart of the Sea’ 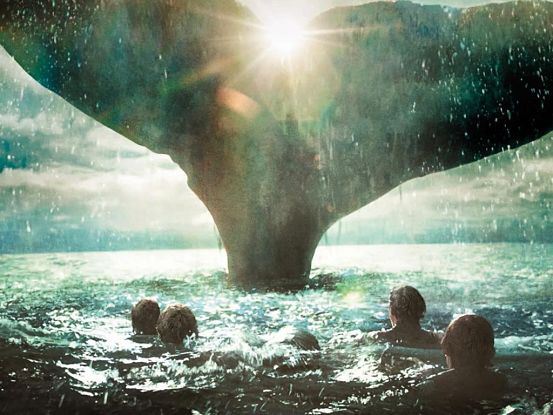 BIG FISH: Man versus nature is a central theme in the Ron Howard-directed film.

Many classic novels have their origins in the incredible circumstances of a real-life scenario. Apparently, Moby Dick is among them. In The Heart of the Sea, the epic new film from Oscar-winning director Ron Howard, chronicles the adventurous saga that reportedly provided the source material for Herman Melville’s literary juggernaut. In fact, Melville himself makes a cameo in the film, appearing, true to form as an avid young writer who seeks out the retired ship hand (Brendan Gleeson), who can give him the story like no other. And what a tale it is, laced with edge-of-your-seat thrills and suspense, seafaring spectacle and the kind of historical detail that distinguishes the best period films.

Set in 1820, the film introduces us to a team of crewmen onboard the New England vessel The Essex, who’ve set sail from Nantucket in search of whale oil. Leading the team is Captain George Pollitt (Benjamin Walker), an aristocratic sort who clashes with his first mate Chase (Chris Hemsworth), a chap from more humble beginnings who has ambitions of becoming a captain. But with rough seas and bunch of men (some inexperienced) looking to them for leadership, Pollitt and Chase must put aside their differences for the sake of the Essex.

The peace is short-lived, however, when the Essex become the target of a massive 12-fot white whale who hounds them into eternity, battering the ship mercilessly. Before long, the crewmen find themselves locked in a fierce battle for survival against this deadly enemy, who will stop at nothing to destroy them.

Howard may be the auteur behind such screen gems as A Beautiful Mind, but here he reveals a spiky gift for heart-pounding action and visual power that combines stunning cinematography and eye-popping art direction. All of his actors – an accomplished team that also includes Cillian Murphy and Tom Holland – deliver solid work but the versatile Hemsworth (Thor) is a cut above the rest, and the role makes for a fine addition to his growing body of work.

In The Heart of the Sea, a fitting title, is the film adaptation of Nathaniel Philbrick’s nonfiction effort of the same name, released in 2000. As the inspiration for Moby Dick, the events that it chronicles reaffirm the notion that the ocean of full of unfathomable secrets and mysteries we’ll never understand.

Email ThisBlogThis!Share to TwitterShare to FacebookShare to Pinterest
Labels: At The Movies, Chris Hemsworth, Current Cinema, Flick of the Week, Movie Reviews