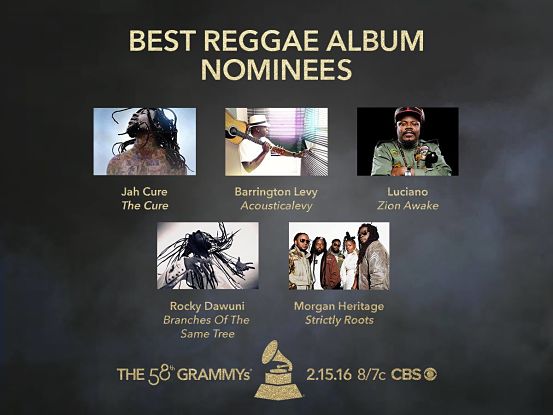 For the first time in ages, no member of the Marley family scored a Grammy nomination for Best Reggae Album this year. Nevertheless, the crop of contenders for the 2016 award is a pretty solid bunch, comprised of a mix of established acts, long-serving reggae ambassadors and, of course, a first-time nominee and non-Jamaican we’re hearing about for the first time.

Leading the pack is resurgent hitmaker Siccature ‘Jah Cure’ Alcock, whose excellent CD, The Cure, was released by VP Records at the top of the summer. After the runaway success of their last album, Here Come the Kings, which ended up being snubbed, Morgan Heritage, who’ve been touring non-stop in recent years, bounced back in a big way with Strictly Roots (CTBC Music Group), their latest effort earning a well-deserved nod.

Following up his recent Buzzz Magazine cover profile in the best way possible, the legendary Barrington Levy also picked up a nomination for his much-buzzed-about comeback disc, the curiously titled Acousticalevy (Doctor Dread Presents), which reintroduced him to diehard fans and, no doubt, won him some new listeners.

We’d never heard of the Ghanaian singer-songwriter before this week, but apparently his album impressed the judges because Rocky Dawuni’s Branches of the Same Tree has earned a place on the shortlist. And, rounding out the list of five is Zion Awake (VPal Music) from the original messenger himself Luciano, who was off the radar for a spell but is back to claim his rightful place in the pantheon of iconic Jamaican singer-songwriters who are taking conscious reggae music to the four corners of the globe.

In the meantime, the likes of rap superstar Kendrick Lamar, pop phenom Taylor Swift and a wave of relative newcomers earned multiple mentions when the list of nominees was unveiled on Monday. Winners will be announced during the annual live telecast on CBS, scheduled for Sunday, Feb. 15.