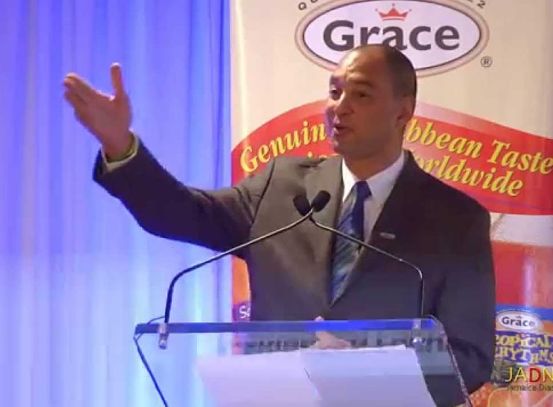 FIGURE OF SPEECH: “Accounting has always been my passion,” says Wehby, hailed as an exemplar of the profession in Jamaica.

Karen Smith delivered a sublime cabaret-style rendition of “Only You” as a serenade for the entire Grand Jamaican Suite at the Jamaica Pegasus on Thursday night, but it could very well have been a special dedication to man of the hour, Donald George Wehby, who was being honoured with the 2015 Distinguished Member Award from the Institute of Chartered Accountants of Jamaica (ICAJ), on the occasion of their 50th anniversary.

As expected, Wehby, looking shiny like new money and sartorially sharp in traditional tuxedo, was toasted all night long. His ICAJ associates, esteemed corporate-scene colleagues, staffers from GraceKennedy Limited (where has been Group CEO since 2011) and general well-wishers packed the sprawling hotel suite for the Golden Gala Banquet, gussied up in their Sunday best, to salute their brother.

In keeping with tradition, they could easily have roasted him in good fun with their tributes but, for the most part, they went easy on him. Especially Douglas Orane, Grace’s retired Chairman, who admittedly borrowed a copy of Dancehall Queen from Wehby’s vast DVD collection of Jamaican movies and is yet to return it. “Don is the closest I’ve come in life to having a younger brother. We are always in sync and that continues today with our evolving roles. The two of us think very similarly and it was a great experience working together at Grace,” Orane said during his turn at the podium, also drawing attention to Don’s multiple professional skills. “He is a networker greater than me and very good at making quick decisions on the spot. But what I think is truly special about him is his courage. I can’t think of a better person for you to honour as a role model for the younger generation.”

Grace’s Fay McIntosh wholeheartedly concurred. “He is a great boss who makes others fulfil their potential. He is known for spotting talent. Some of the shining stars at Grace today are there due to his confidence and nurturing,” she said. “And under his leadership, Grace continues to contribute to nation-building and corporate social responsibility, especially in areas like sports and education. We congratulate him on [receiving] this award. It is a well-earned and well-deserved honour.”

Hailed as “an exemplar in the field” by Nigel Chambers (who read the citation), Wehby was honoured for contributing to the prestige and status of the accounting profession in Jamaica, service to the community, and for special achievements. During his acceptance speech, Wehby took his audience down memory lane. “Accounting has always been my passion,” said the St. George’s College and UWI Mona alum, who first arrived at Grace as Finance Manager in 1995 and has served in Jamaica’s finance ministry. “When I was younger, I used to literally dream of signing a balance sheet of a large company, so being here tonight is living proof that with long hours, passion, dedication and a good education, dreams can come true.”

Speaking with the sports buff (horse-racing, track and field) after the ceremony, our conversation quickly settled on his alma mater’s recent losses in two consecutive schoolboy football finals. “I still feel that they did well. It’s sad that the team lost, but that’s just how it goes sometimes in sports,” said the former Champs hurdler and cricketer.

In Wehby’s book, St. George’s College remains number one nationally. “Despite us losing I think the team is still by far the best schoolboy team in the island,” he said, before offering an interesting opinion: “The thing with the Manning Cup is that it should be played as a best of two or three, instead of just one final. I think that’s a much better way to do the finals.”