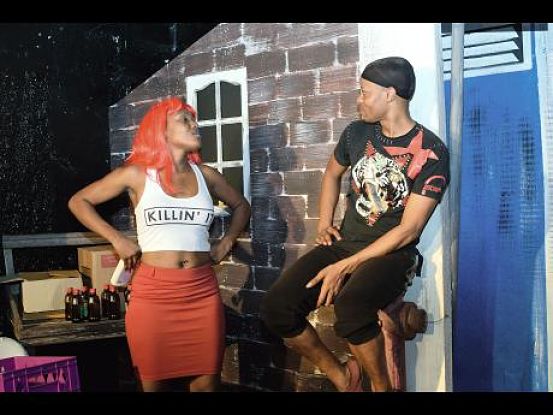 MIX & MATCH: Ellis (left) and Ramsey, who play vendors struggling to survive. Below, Salmon and Tulloch.

David Tulloch may be known as the brains behind some of the most insight-rich and compelling domestic dramas to grace the Jamaican stage in recent memory but, by all appearances, the avid playwright is “broadening his range.” His foray into full-throttle roots theatre gets a vivid showcase in this season’s Bangarang, which marks his fifth collaboration with RBT Productions.

Of course, the play is not as cerebral or subtle as previous entries in his canon (For My Daughter, Wine & Roses), but Bangarang is a superfunny, crowd-pleasing delight that drives home salient points about the harsh socio-economic realities of downtown Kingston and the denizen who know all too well its struggle-and-survival dynamics.

As expected, broad humour figures prominently in this potboiler, and there are enormous doses for the audience, thanks in large part to the ever-reliable Shebada, who regularly sends the crowd into stitches with his latest incarnation – as a Princess Street vendor who has it in for Pearl (Monique Ellis), his down-on-her-luck colleague, who also ekes out a living as a prostitute.

Times are rough for downtown vendors, and everybody is feeling the pinch. And that includes Miss Chin (a terrific Terri Salmon), who has greedily set her sights on expanding her wholesale empire to encompass much of the downtown landscape. So when two-faced MP aspirant Winston Justice (Chris McFarlane) appears with his pauperism-to-prosperity ideas (to win votes!), Miss Chin wastes little time sinking her claws into him.

Throw into the mix Winston’s pursuit of Pearl, much to the chagrin of Officer Shellaz (a dim-witted road cop played by Patrick Smith), who wants Pearl all to himself – and the appearance of a Rastafarian weirdo, who goes by Preacher (played by Tulloch), who also wants a piece of the Pearl action.

Everybody is up to something. Nothing can be taken at face value. And, as the story progresses, the sobering lesson becomes clear: always watch your back.

Bangarang, directed by B.L. Allen, is not without its shortcomings – there are occasional technical glitches and the set design is mediocre at best. But it’s a worthwhile theatrical production that reaffirms Tulloch’s knack for spinning a balanced story with twists and turns you never saw coming.

Ellis remains a rising star to watch. Salmon, Smith and McFarlane are far from flawless but they are expressive and appealing actors. The same goes for Shebada, who deserves his own TV sitcom. Audiences would tune in by the thousands just for the punchlines.

Flaws aside, Tulloch’s Bangarang delivers on the promise of its title, offering a very convincing and laugh-out-loud funny slice of Jamaican life. Tyrone's Verdict: B