THE MEASURE OF A MAN: Remembering Monsignor Richard Albert, true Jamaican nationalist and champion of the poor 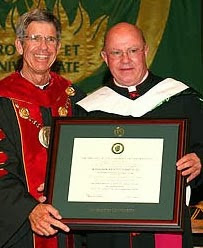 By all accounts, he was not without his vices – he loved a good cigar and could hold his whiskey – but, by and large, the Monsignor Richard Albert who was eulogized during a reflective and occasionally lively mass of Christian burial at the Stella Maris Catholic Church on Wednesday was a larger-than-life humanitarian who believed, wholeheartedly, that giving is the highest form of living. What’s more, as a man of the cloth, he not only talked the talk, he walked the walk with gusto and purpose.

“Energy and optimism were characteristics that Richard seemed to possess in limitless quality. Whatever it was he threw himself into it. He saw a problem and worked to correct it, regardless of cost, personal or otherwise,” recalled Joseph M. Matalon, who delivered the remembrance. Matalon, who first met Monsignor Albert in 1989 when he was pastor of the Waterhouse-based St. Patrick’s Church, would eventually become the first Chairman of the St. Patrick’s Foundation, which Albert started five years later. 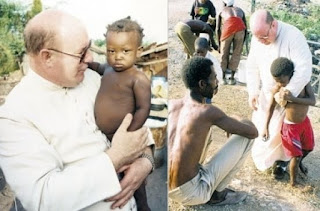 Like many of us, Mr. Matalon emphasized, he was simply in awe of the man, whose tireless efforts also gave birth to the Stella Maris Foundation, which has become synonymous with transformative work in the Grant’s Pen community. “He tackled national issues with CAFFE and Jamaicans for Justice. He was a force to be reckoned with and gave sterling service to his first love, the Roman Catholic Church in Jamaica and the Caribbean,” Matalon reminded the large congregation. “He had deep and abiding faith and a noted ability to mobilize resources.”

Still, one thing that’s long puzzled many about Monsignor Albert, including CNN investigative journalist Christiane Amanpour and the filmmakers behind an upcoming biopic (starring David Arquette), is the priest’s decision to make a life out of working in some of Jamaica’s most rough-and-tumble, violence-prone inner-city zones (like Riverton, Calaloo Mews and Grant’s Pen). Richard Jerome Albert, born June 29, 1946, left his native Bronx, New York, to join the Catholic ministry in Jamaica in 1976 and has been here ever since, eventually being granted Jamaican citizenship. He died at hospital on November 30 after falling ill. He was 69 years old.

According to Junior Rowe, a member of the Riverton community who gave a tribute, one of Father Albert’s favourite sayings was ‘When it comes to serving the poor you have to stand shoulder to shoulder.’ This kind of approach to service led to the establishment of programmes that resulted in job creation, skills training, and education for the less fortunate, young and old. Kevin Fay, a fellow Caucasian do-gooder and friend from the United States described Albert as a man full of “zeal for the pursuit and fulfillment of his mission.” Rev. Ronald Thwaites, who gave the homily, called it “generosity of spirit.”

His sister, Rita Mulvey, whose tribute appeared in the funeral programme noted, “Our family has been thanked many times for loaning him to Jamaica, but we want to thank you for making Jamaica his home and becoming his family just as we are his family in New York.” 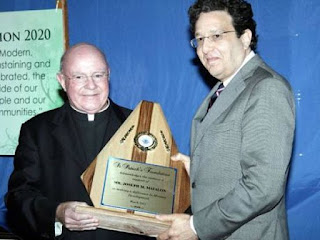 And since every hero must face the challenges of detractors, it goes without saying that not everybody welcomed Richard Albert with open arms. In his reflection, Fabian Brown, the first appointed director of the St. Patrick’s Foundation, recalled witnessing “the harsh realities of threats from those who stood against his mission,” circumstances which only served to bolster his resolve. “My journey with him to offer ‘a hand-up rather than a hand-out’ continues to be the fulfillment of my own life,” Brown stated.

Looking ahead to a Jamaica sans the presence of such an irreplaceable and beloved public figure – a true Jamaican nationalist – Matalon says our responsibility is simple. “He would wish that we celebrated his life and that the fruits of his labour do not die with him,” said Matalon. “It is our duty to continue to champion the cause of the poor and marginalized to which he dedicated his life.”