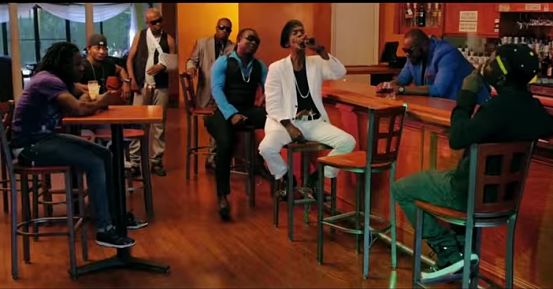 HARD TIMES: Scenes from the film, which opens in local cinemas next week.

A highly commendable addition to the CineJamaica canon, Jamaican Mafia is a gripping and visceral film that will certainly get people talking. Like Shottas, it can be graphically violent and off-putting, and it contains a few telling scenes that are not for the faint of heart. But what I like most about it is that it offers a very realistic portrait of greed, loyalty, family and why crime doesn’t pay.

There’s also that relatable arc about a young and ambitious kid, about twentysomething, straying from the straight and narrow and into a criminal lifestyle. In the end, you are reminded that crime is a vicious cycle that can chew you up and spit you out and, when all is said and done, blood is thicker than water.

Directed by Vafomba Donzo and largely set in the Flatbush section of New York, Jamaican Mafia introduces us to Zoolian (Mykal Fax, pulling double duty as writer/co-producer), who walks away from his job as a salesman at a car dealership after a verbal clash with his boss almost gets physical – much to the dismay of his female roommate to whom he relates the episode later that day.

Though tirelessly warned by his mother about the kind of people they are, Zoolian takes up the offer to become a member of the mafia clan headed by his uncle Soljie (Paul Campbell in a towering performance). But, in a way, the move is a rite of passage for young Zoolian whose late father was instrumental in the establishment of the ‘family’. Now, the time has come for ZuZu (as they affectionately call him) to take his place in the posse.

Before long, Soljie and right-hand man Massop (Stokely Brown) start grooming him to take over from Soljie, who is battling serious ill health. But does Zoolian have the stomach for the grotesque guns-and-drugs lifestyle, not to mention the rampant killings and extortion racket that are part of the posse’s daily dealings? It’s a new chapter in the kid’s life that seriously tests his mettle and gives him a core-shaking education and ushers him into manhood.

Like some of the previous films of its kind (Shottas leaps to mind again), the action in Jamaican Mafia is fast-paced and the dialogue, though jarring at times, comes laced with frequent humour. Fax, whose writing bears keen observations and commentary about Jamaicans making life in rough-and-tumble parts of the United States, also shows promise as a leading man and keeps pace with Campbell who, as ever, stands tall and delivers like a colossus.

As an actor committed to his part, Campbell seems equipped to deliver whatever is required of him, with the depth and range befitting a veteran of his ilk – even when he’s scaring the living daylights out of you.

They are newcomers to the craft of acting, but the likes of D’Angel, Martina and Nardo Ranks make the most of their small roles.

Overall, Jamaican Mafia is no letdown, but it is best described as an equally unsettling and wildly entertaining cinematic experience that tackles crime and violence (without glorifying it), while seriously examining ruthless ambition and family loyalty.