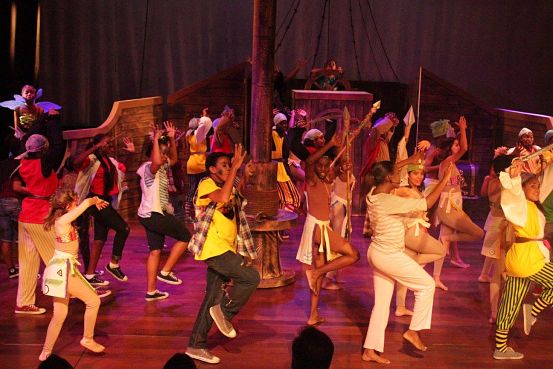 THE BRIGHT SIDE: Viibrant colour and sonic power add to the musical's overall appeal.

If you happen to be in the vicinity of the UWI Mona Campus this weekend, please drop by the Philip Sherlock Centre to see the Jamaica Junior Theatre Company’s Pan. You are in for a rollicking good time. A thrilling, tuneful song-and-dance hit, the show is brought to life by an energetic group of teenagers whose youthful exuberance go hand in hand with the magical spirit of adventure that the show celebrates.

Based on J.M. Barrie’s timeless fantasy Peter Pan, the JJTC’s fresh adaptation puts a charming and modern Jamaican spin on the beloved children’s classic, similar to what they accomplished with shows like Alice (2013) and 2012’s Hercules. (Come to think of it, the company has presented a working of Pan before, back in 1995 to be precise, so this mounting marks a hugely successful update.)

Peter Pan may be the boy who refused to grow up, but in productions across the globe (Broadway included), the role is often turned over to a young lady. Most recently, Allison Williams (HBO’s Girls) got to play the boy in green for NBC’s Peter Pan Live! Now, the JJTC has followed suit, tapping Zoe Daniele Chin Sang to fill the role. A petite pixie-muse with a big voice, she brings panache and winning charisma to the part, even fitting snugly into the Robin Hood-esque costumes.

As the story goes, Pan (ever looking for some trouble to get into) pays a night-time visit to the Darlings – Wendy (Kiandra Edwards), Michelle (Paige Andrade) and Simone (Gabrielle Mair) – and with (reluctant) aid from his fairy sidekick Tinkerbell aka Tink (Courtni Spencer) sprinkles them with fairy dust. Before you can say 1, 2, 3, they’re off sailing through the clouds headed for Never-Never-Land. It’s a dream come true for these impressionable kids whose doting parents (Andrew Laidley and Sydnie Greaves) don’t have a clue that they’ve left the house. It’s now up to Wendy to play big sister. 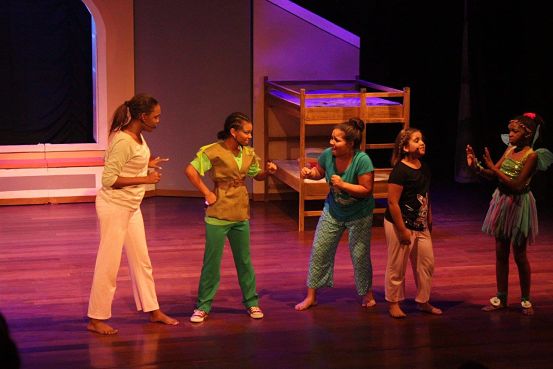 Basking in their newfound freedom, the girls bond with “natives” (the coconut-loving Lost Ones), but in a place like Never-Never-Land, trouble is never far away. Soon, the Darlings become the target of some ruthless pirates, whose foul-tempered leader Captain Hook (Philip Wheatle, highly commendable) is hungry for revenge against Pan for the loss of a hand. Traps are set, battle lines are drawn, setting the stage for an epic showdown that brings the show to a booming climax.

Though the final scenes in the production feel hastened, the young performers are so innocently committed to what they’re doing, you really don’t feel like complaining. Overall, the show looks good and the music sounds wonderful. Numbers like “Pure Imagination”, “Anything Can Happen” and the eternally optimistic “Keep on Dreaming” are standouts.

Co-producer and director Danielle Stiebel, Samantha Chin-Yee and Jodi HoLung (and the rest of the creative team) deserve kudos for an undertaking that yields some impressive results. Set maestro Michael Lorde truly outdid himself with a pirate-ship design that combines stunning craftsmanship – and creative imagination. And that’s exactly what drives a show like Pan, full of colour, sonic power, vibrant costumes, humour and untameable spirit of adventure. Tyrone’s Verdict: B