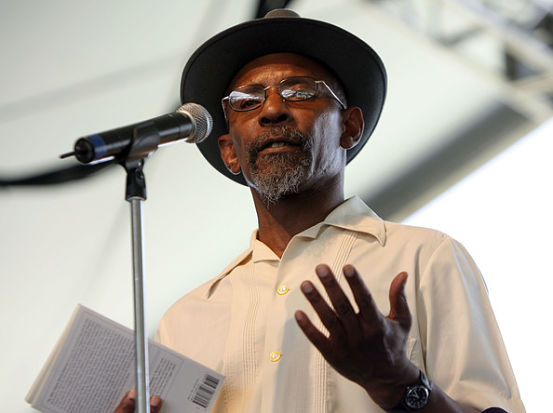 This semester, at the University of the West Indies’ Reggae Studies Unit, a research-paper course being taught by Dr. Carolyn Cooper, largely explores the body of work created by iconic poet, author and reggae artiste Linton Kwesi Johnson. Johnson has lived and worked in the UK for decades, but he usually comes to Jamaica to visit his mom, who resides in Montego Bay, St. James, at this time of year. So the Department of Literatures in English invited him to give a ‘Reggae Talk’ on campus Tuesday evening dubbed “Reggae by Accident.” What an eye-opener! “I think he’s a very important poet,” says Cooper, the former head of the Reggae Studies Unit. “And I thought he deserved his own course.”

Johnson was very candid and thorough as he reflected on his creative artistry and legendary career that he feels became his by ‘accident.’ “Looking back I am sometimes astonished that for 40 years I’ve been able to maintain a reggae career,” admits Johnson, rocking his signature top hat and spectacles. “Why astonished? Because I had no ambition of becoming a reggae artiste. My journey to a reggae career was a circuitous one.”

A 2005 Silver Musgrave Medallist, the author of five poetry collections, the first Black poet featured in the Penguin Classics Series (Mi Revalueshanary Fren) and the founder of LKJ Records, Johnson says back in the day he found himself morphing into an avid reggae collector and soon embarked on the path to becoming a reggae poet.

Today he marvels at the genre’s evolution from “rebel music” to global phenomenon – and cringes at the fact that European countries are now staging bigger and more well-supported reggae festivals than Jamaica. “Only in Jamaica,” LKJ insists, “has dancehall overshadowed reggae.”

When it comes to the Joss Stone/Billboard/Reggae Artiste of the Year episode, LKJ says it’s much ado about nothing. “Joss is somebody I admire as singer,” says the poet, who has lived in England since 1963. “And there are quite a few reggae artistes on that album [Water for Your Soul], including myself.”

Whether he was recalling his session with Miss Lou back in 1982 (while doing research for a BBC series), his Black Panther days or receiving “a lot of hate mail” from detractors, Johnson’s presentation was never short on insight. In the end, you realized that for LKJ reggae was way more than music. “It helped to bridge a social divide between black and white communities,” he says. “It was a force against cultural oppression.”

When it comes to the new generation of reggae ambassadors, Johnson sees greatness in at least two standouts. “I did a show with Etana sometime ago, and I think she’s very talented,” he offers. “And I think Chronixx is very promising.”

> MAKING A POET: LKJ riffs on his journey