ALL IN THE FAMILY: Samuels, HoShing and Titus play a family with secrets in Dawkins' latest.

A son’s homecoming, a mother’s failings and a father’s revelatory confessions set off a fierce reckoning with the past in Basil Dawkins’ powerful new stage play, Guilt Trip. Co-directed by Douglas Prout and Toni-Kay Dawkins, it’s a dialogue-heavy domestic drama full of grit, palpable intensity and raw emotions, exploring themes ranging from parenthood and family dynamics to growing pains and mental health. It’s a transformative theatrical experience that would make a terrific short film.

Oliver Samuels is Steadman Hall, the easygoing patriarch whose a-river-runs-through-it country life in Westmoreland gets a jolt of excitement when his now fully grown son Morgan (Dennis Titus) pays him a surprise visit. After studying for several years abroad, Morgan, now a big-shot scholar eyeing a second PhD, is home for the holidays.

He’s braved the bus trip from Kingston to the west to find his dad, much to the dismay of his mother Irene Jackson (Ruth HoShing), who still treats Morgan like her baby boy and doesn’t want a hair on his head to be harmed. What’s more, she doesn’t get along with the father. That’s why she’s trailed Morgan all the way to Westmoreland and throws all kinds of tantrums when she hears that her precious son has gone down to the river with some of the other boys from the community.

But Dawkins has bigger fish to fry than spinning a simple tale of father-son reunion and reconnecting with one’s roots. As it turns out, Morgan has serious inquiries for his parents about aspects of his identity and his heritage, and when the answers aren’t forthcoming, their reticence arouses his suspicions. Soon, things grow extremely tense, bordering on explosive, between the three of them, threatening to send Morgan over the edge. 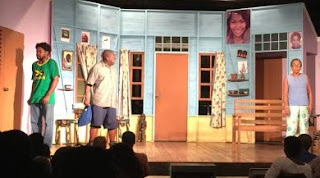 The characters are pitched as three lead roles, and the actors take to them accordingly. While there’s no apparent competitive gleam, they each pull their weight impressively. As Irene, HoShing achieves a fine balance of restraint and pent-up rage. Titus is marvelous at demonstrating Morgan’s fight to hold on to his sanity in the face of some tough truths. Samuels, meantime, gets to channel a young-at-heart alter ego, delivering a performance that blends stamina, athleticism and sarcastic wit.

The show’s set design (alternating between Steadman’s place in the country and Irene’s house in town) is simple and tasteful, but the one-note lighting design could have better conveyed the energy and emotional roller-coaster that the production delivers.

Even so, Prout and Dawkins and their creative collaborators have real reason to hold their heads up, as the show packs the humour, insight and relevance that today’s intelligent theatregoers are looking for.

More to the point, Guilt Trip reminds you that knowledge of your past can turn out to be cruel and emotionally draining, but it can also be a powerful and invigorating force. Tyrone’s Verdict: B+