HEALING THE NATION: “We cannot tax our way out of all our problems” – Pastor Glen Samuels 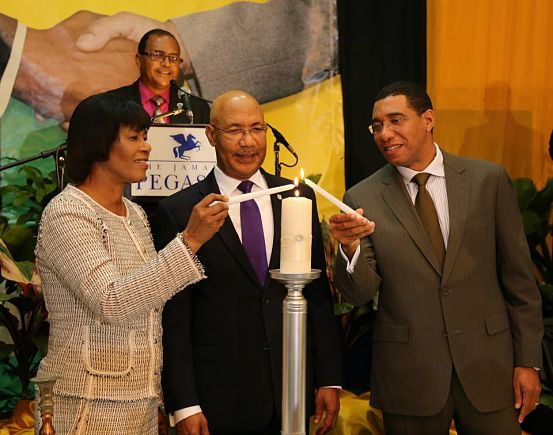 LET THERE BE LIGHT: Simpson-Miller, Sir Patrick Allen and Holness participate in a symbolic show of unity at the event.

In a fired-up and no-holds-barred keynote address at Thursday’s National Leadership Prayer Breakfast – the 36th staging – at the Jamaica Pegasus Hotel in New Kingston, Pastor Glen Octavius Samuels urged Jamaicans at all strata of the society to pull together in the fight against the myriad social ills plaguing the country at this time. Samuels, President of the West Jamaica Conference of Seventh-Day Adventists was particularly vociferous while drawing attention to such issues at the disheartening crime rate statistics, the “overburdened and underfunded” health-care system and moral decay affecting wholesome family life.

“It is not just up to the political leaders, but in leadership at all levels, if we are going to build a nation to the honour of God,” Samuels emphasized. “We cannot tax our way out of all our problems. There is nothing wrong with Jamaica that cannot be fixed with what is right with Jamaica,” he added, stressing the need for transparency and accountability at all levels.

The strongest audience reaction during Pastor Samuels’ presentation came, however, when he put the focus on morality and the state of the Jamaican family. “There is too much irresponsibility among our male and female folk. We need more responsible father in this country. It is not enough to be a sperm donor,” he said.

Pastor Samuels said that as a result of the breakdown in values and the family structure, our society has become “coarse, crude and calculatedly cruel” – a once “lovely and peaceful paradise” that’s become overrun with knives, bullets and senseless bloodshed. The solution, he firmly believes, rests in collective and tireless team effort. “We must all share the responsibility of building a better nation blessed by Almighty God…. Doing the right thing because it is the right thing to do is what will exalt the nation.”

Each year, the NLPB organizing committee chooses an appropriate theme to reflect the church’s message to the nation. The 2016 theme is “Righteousness exalts the Nation.” First held in January 1981, following the General Elections of 1980, the National Leadership Prayer Breakfast arose out of a need to foster greater national unity, particularly among political and civic leaders. Governor General Sir Patrick Allen, Opposition Leader Andrew Holness and Prime Minister Portia Simpson-Miller were all in attendance this year.