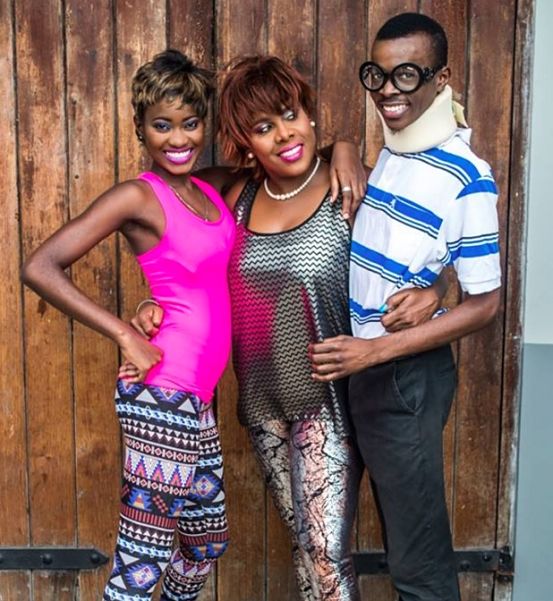 THE GOOD GUYS: Jackson, Silvera and Dennis who heat up the stage in Harris' latest.

Good fences make good neighbours, or so we’ve been told. But that’s the furthest thing from the minds of the two families we encounter in Dahlia Harris’ Same Difference, a riotously funny drama-comedy about class relations, prejudice and the ties that bind. Aside from the robust acting performances, by a stellar cast led by Volier Johnson and Deon Silvera, the play’s strongest asset is its frank exploration of the deep-seated hypocrisy lurking in certain quarters of upper-crust Jamaican society.

That said, it hardly comes as a surprise that the well-to-do Goodmans (former Cherry Gardens residents played by Johnson and Maylynne Lowe) and ‘nouveau riche’ single mother Mini-Bar, a rowdy hustler played by the always welcome Silvera, are at ‘war’ over what initially seemed to be cultural differences and opposing views on socialization. They are neighbours up in cool Chancery Hall but the heat that their tension generates soon turns explosive.

Long hidden skeletons come tumbling out of the closet and you are reminded of something one should never forget: it’s a small, small world.

It’s obvious from the get-go that Harris (who pulls triple duty as writer, producer and director) loves the five characters who populate her story, as they are well-drawn specimen from the pool of colourful Jamaican folk. She gives them hilarious, but frequently hilarious, things to say. Especially Johnson’s Buster Goodman, a veteran medical doctor whose hyperactive wife (Lowe as the hoity-toity Livy Goodman) blows hot and cold. She’s also reproductively challenged and is the queen of whipping up smoothies.

Next door, however, all manner of abuse, domestic strife and high-volume dancehall are given free rein as Mini and her two headstrong teens – Shantol Jackson as livewire Candy-Bar and Desmond Dennis as the loquacious nerd Ivar – give new meaning to living out loud. They are forever going at it. But beneath all that hostility are human beings crying out for love and attention.

All of the actors turn in convincing work, and though Harris wraps up their storylines a bit too neatly, we get to see them for who they really are – real people with quirks and fears and flaws. People like us.

On opening night the show was occasionally interrupted by technical problems, which affected the sound and lighting. But, thankfully, that took nothing away from the audience’s enjoyment of the story. Big laughs galore. Kudos, too, on the lovely set design, which lent the show some crisp visual power.

In a nutshell, the richly entertaining Same Difference is easily one of the best shows you’ll see in town this season. It’s currently on for a limited run at Merle Grove High, but we strongly recommend that the run be extended. Tyrone’s Verdict: B+