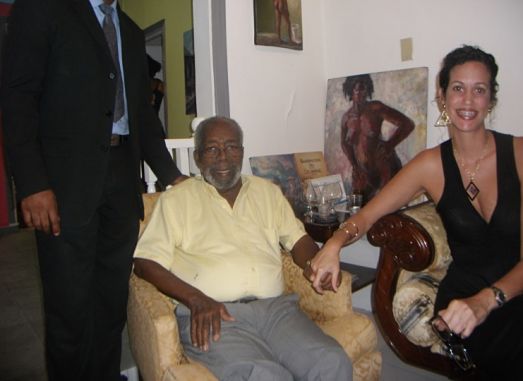 Speaking with a local newspaper earlier this week in the wake of her husband’s death, Doreen Watson expressed her belief that among the persons who will most greatly miss Barrington Watson are his students who looked to him as mentor and inspiration. In hindsight, we understand why.

TALLAWAH was the last online publication to talk with Watson at length. Last June, we met for a face-to-face interview that coincided with an art show at Old Hope Road’s Gallery Barrington (organized by Kingston on the Edge), featuring the legendary artist and a handful of his students showcasing some of their finest works and fielding questions about passion and process. A truly memorable occasion. Barry was absolutely generous and candid as he reflected on his life and his light. A light that has now flickered out.

After ailing for some time, Barrington Watson died at his St. Andrew home on Tuesday, surrounded by relatives. He was 85 years old. (According to reports, he was diagnosed with cancer last February.)

By all accounts, Watson lived to tell stories with his paintbrush and inspire others, including Jamaica’s emerging generation of artists. And he was good at what he did. As a rising star in his heyday, he was considered a unique talent among his peers, and the Jamaican art world quickly made room for his extravagant visual appetites and exquisite eye.

“I think most people would agree that [when it came to] realist art he had no equal,” fellow art legend and former chief curator at the National Gallery of Jamaica, David Boxer, recently told an interviewer. “He was the most highly trained artist, and he brought those academic principles to art. Quite simply a display of great competence based on extraordinary drawing skill.”

Watson, whose most well-known pieces include Mother and Child (1958) and Conversation (1981), hailed from Hanover but attended Kingston College before enrolling at London’s Royal College of Art. A member of the Order of Jamaica and a recipient of the Gold Musgrave Medal from the Institute of Jamaica, he held the distinction of serving as the first director of studies at the Jamaica School of Arts and Crafts (now a part of the Edna Manley College of the Visual and Performing Arts).

Esteemed actor George Carter also passed away recently, prompting culture minister Lisa Hanna to issue a statement hailing both Carter and Watson as icons of the arts whose national contributions can never be forgotten. “Both Barrington and George not only dedicated their lives to expressing their own unique creativity while building a legacy,” Hanna says, “but also dedicated their lives to promoting Jamaica’s rich and diverse cultural heritage.”